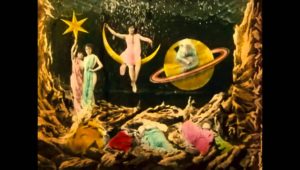 Whereof what’s past is prologue;

I have a strong belief in showmanship. I know that this industry if it looks back at it’s origins might find the inspiration to use the lessons from the past and re-vitalized the theatrical exhibition industry.

Ciema, as an art form, a commercial enterprise and an entertainment exploded into the world on December 28, 1895, in Paris, France. The Lumiere Brothers were the first filmmakers in history. They patented the cinematograph, which in contrast to Edison’s “peepshow” kinetoscope allowed simultaneous viewing by multiple parties.

The Lumieres presented the first commercial and public exhibition of a projected motion picture to a paying public in the world’s first movie theatre – in the Salon Indien, at the Grand Cafe on Paris’ Boulevard des Capucines. In 1897, a cinema building was built in Paris, solely for the purpose of showing It has often been considered “the birth of film” or “the First . Cinema” since the Cinematographe was the first advanced projector and the first to be offered for sale.

The 20-minute program included ten short films with twenty showings a day. The ten shorts included the famous first comedy of a gardener with a watering hose (aka The Sprinkler Sprinkled, Waterer and Watered,or L’Arrouseur Arrose), the factory worker short , a sequence of a horse-drawn carriage approaching toward the camera, and a scene of the feeding of a baby. The Lumieres also became known for their 50-second short Arrivee d’un train en gare a La Ciotat (1895) (Arrival of a Train at La Ciotat), which some sources reported was shocking to its first unsophisticated viewing audience. By 1898, the Lumiere’s company had produced a short film catalog with over 1,000 titles.

After showing films in a lakefront park, William “Pop” Rock and Walter Wainwright transformed a converted vacant store (at 623 Canal St.) in New Orleans, Louisiana into Vitascope Hall. On July 26, 1896, it became the first “storefront theater” in the US dedicated exclusively to showing motion pictures, although it screened films for only two months. The theatre accommodated 400 people, and had two shows per day, with admission 10 cents.

The world’s first permanent movie theatre exclusively designed for showing motion pictures was the Edisonia Vitascope Hall, a 72 seat theatre which opened in downtown Buffalo, New York on Monday, October 19, 1896 in the Ellicott Square Building on Main Street. It was created by Buffalo-based entrepreneur Mitchell H. Mark, a supreme visionary of the future of motion picture theaters. It was likely that the opening night’s showing including US premieres of the Lumiere films , since Mark had contracted with the Lumieres (and Pathe Freres) in France to exhibit their films in the US. The Vitascope Theater in Buffalo remained open for nearly two years. With his brother Moe, Mitchell Mark would open other theaters in Buffalo, as well as New York City, Boston and elsewhere. They were responsible for one of history’s earliest “movie palaces,” the 2800-seat Mark Strand Theater in NYC.

Early Jewish film pioneer Sigmund Lubin (aka Siegmund Lubszynski) constructed the first purposely-built movie theater in West Philadelphia, PA for the National Export Exposition, in 1899. Lubin’s Cineograph Theatre was a small, modest portable theatre built on the esplanade or midway of the fair. It was possibly the world’s first structure erected expressly for the presentation of motion pictures. For ten cents, patrons could view “continuous shows” of the Spanish-American War, reproductions of boxing matches, and several of Lubin’s own home-made productions. The film billed as “The Sensation of the Hour” was The Dreyfus Court Martial Scene. It was evidence of Lubin’s early work as a motion picture distributor and exhibitor, to showcase his projectors, cameras, and films.

Later on in 1902 in downtown Los Angeles, Thomas L. Talley’s storefront, 200-seat Electric Theater was another of the first permanent US theaters to exclusively exhibit movies – it charged patrons a dime, up from a nickel at the nickelodeons.In 1905, John P. Harris and Harry Davis opened a five-cents-admission movie theater in a Pittsburgh storefront, naming it the Nickelodeon and setting the style for the first common type of movie theater. By 1908 there were thousands of storefront Nickelodeons, Gems and Bijous across North America. A few theaters from the nickelodeon era are still showing films today.

In 2008, the owners of the Korsør Biograf Teater in Korsør, Denmark, discovered that they were operating a movie theater that opened in August 1908. They were accepted by Guinness World Records as the oldest still-operating movie theater in the world.

In 1912, the Picture House, in Clevedon, England, opened with a charity film performance to raise funds for the victims of the Titanic disaster, and has been showing movies continuously since. The 1913 opening of the Regent Theater in New York City signaled a new respectability for the medium, and the start of the two-decade heyday of American cinema design. The million dollar Mark Strand Theatre at 47th Street and Broadway in New York City opened in 1914 by Mitchell Mark was the archetypical movie palace. The ornate Al. Ringling Theatre was built in Baraboo, WI by Al Ringling, one of the founders of the Ringling Bros. Circus, for the then-incredible sum of $100,000.00. Los Angeles showman Sid Grauman continued the trend of theater-as-destination with his ornate “Million Dollar Theater”, using the same design firm as Ringling. It opened on Broadway in downtown Los Angeles in 1918.

In 1915, the tremendous success of D.W. Griffith’sThe Birth of a Nation helped to establish the supremacy of feature films,[which forced the owners of five-cent theaters to increase the ticket price to ten cents or more, then either remodel to provide a more comfortable and pleasant environment or relocate to a bigger and better auditorium, bringing the nickelodeon era to an end.

A partial drive-in theater – Theatre de Guadalupe – was opened in Las Cruces, New Mexico, on April 23, 1915.Seven hundred people may be comfortably seated in the auditorium. Automobile entrances and places for 40 or more cars within the theater grounds and in-line position to see the pictures and witness all performances on the stage is a feature of the place that will please car owners.

In 1921, a drive-in was opened by Claude V. Caver in Comanche, Texas. Caver obtained a permit from the city to project films downtown. With cars parked bumper-to-bumper, patrons witnessed the screening ofsilent films from their vehicles. By the 1920s, “outdoor movies” became a popular summer entertainment, but relatively few “drive-in” experiments were made due to logistical difficulties.

The drive-in theater was patented by Camden, New Jersey, chemical company magnate Richard M. Hollingshead, Jr.,whose family owned and operated the R.M. Hollingshead Corporation chemical plant in Camden. In 1932, Hollingshead conducted outdoor theater tests in his driveway at 212 Thomas Avenue in Riverton. After nailing a screen to trees in his backyard, he set a 1928 Kodak projector on the hood of his car and put a radio behind the screen, testing different sound levels with his car windows down and up. Blocks under vehicles in the driveway enabled him to determine the size and spacing of ramps so all automobiles could have a clear view of the screen. Hollingshead applied for a patent of his invention on August 6, 1932, and he was given U.S. Patent 1,909,537on May 16, 1933.

The lesson’s from the past tell us the following;

attempt to control the flow of entertainment content
look at alternative venues and outlets
if consumers are not coming to you then go to them
more variety of content on your screens more audience
rotate your product our more frequently
if you want a direction forward, look at the past

Let all think about where we have been……then let’s innovate.