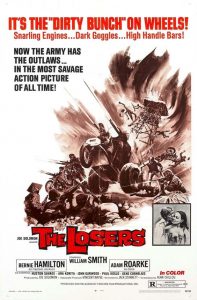 Directed with his customary rip-snorting brio by the extremely underrated and always dependable Starrett (whose other credits include the Jim Brown blaxploitation vehicle “Slaughter,” the hugely enjoyable “Cleopatra Jones,” and the Satan worship car chase knockout “Race With the Devil”), this bang-up gutsy and thrilling little pip works like gangbusters. The pace storms along at a steady, speedy clip. The performances from the top-rate cast are all uniformly excellent (it’s a real treat to see biker pic perennials Smith and Rourke on screen together, plus longtime favorite Filipino fat guy thesp Vic Diaz has a funny supporting part as a friendly mechanic). The incredibly explosive action sequences are staged with considerable incendiary aplomb (the big climactic raid on an enemy prison camp is a definite highlight). Moreover, the bikers themselves aren’t glamorized or sanitized in the least. These dingy dirtball dudes are pure bad news. They are a scruffy bunch of mangy nonconformist malcontents who are as likely to brawl with each other as well as anyone else who crosses their bitter antagonistic path.

Better still, this remarkably bold picture fiercely ridicules America’s involvement in the Vietnam war, clearly stating that we hurt these people more than helped them (the subplot about the Vietnamese prostitute with a mulatto baby is especially poignant and provocative). The fact that this defiant movie was made while the Vietnam war was still going on makes it that much more pertinent and resonant. And the crushingly downbeat bummer ending is likewise very powerful with both its unflinchingly cynical anti-government stance and unsparingly grim statement about the wasteful futility of war. In addition, this film was also influential in that it established the basic let’s-bring-the-boys-back-home premise which was later reused in such 80’s action features as “Uncommon Valor,” “Missing in Action,” and “Rambo: First Blood, Part II.” The Dark Sky DVD offers a beautiful widescreen presentation along with the following tasty extras: two radio spots, the theatrical trailer, a still and poster gallery, and, perhaps the single most savory bonus, a highly amiable, entertaining and informative commentary by stars Paul Koslo and William Smith.