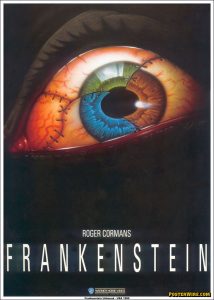 Toiling in the not-too-distant future, Joe Buchanan (John Hurt), a not-quite mad scientist, has invented a machine that vaporises the enemy while leaving the environment untouched, something that will protect the good ol’ U.S of A from evil. The only flaw in Buchanan’s invention is that it has a tendency to open up one of those time-space continuum thingies in the form of a neon-flashing cloud through which the odd Mongol warrior, etc, has a tendency to pop. Before you know it – and not without the viewer experiencing a certain sense of schadenfraude at his plight – Buchanan finds himself sucked into the portal and spat out again in the Alps of 1816. Him and his car, actually – an intelligent, talking, gull-winged item that looks like KnightRider KITT’s sexy sister.

Hiding the car in a convenient barn, Buchanan wanders off in search of life and happens upon a tavern wherein he finds a certain chap named Frankenstein (the late lamented Raul Julia). Strangely enough, neither Buchanan or Frankenstein seem in the slightest bit perturbed to discover that the craggy-faced scientist has strayed some 200+ years from his own era, and strike up a cautious friendship when they realise they are both men of science. Frankenstein has just created his monster (Nick Brimble) who resembles an overweight redneck trucker in a strong headwind rather than a creature bolted together from spare human parts. The monster has adopted the annoying habit of killing locals, including Frankenstein’s brother, seemingly unable to grasp the fact that, unlike him, they aren’t all creations of the good doctor. A young girl has been accused of the murder, and is sentenced to hang for the crime, a fact which doesn’t bother Frankenstein in the least, but which horrifies Buchanan, who attempts to enlist the aid of Mary Shelley (Bridget Fonda) to save the girl. The free-loving writer is in the early stages of writing the Frankenstein novel while enjoying a hippyish summer with George (Jason Patric) and Percy (Michael Hutchence), and is quickly taken with this mysterious (if rather craggy-faced) stranger with the silver horseless carriage. Even back in 1816, it seems, a decent set of wheels was enough to pull a bird…

Frankenstein Unbound was veteran schlock-horror director Roger Corman’s first official attempt at directing for nearly twenty years (although he did have a hand in the direction of 1978’s Deathsport), and it’s not difficult to understand why he might have been attracted to such a project. There’s enough story-line crammed into a scant 82 minutes for three movies, and enough subtext to keep the most analytical of viewers absorbed. Having said that, Frankenstein Unbound is a movie that never rises above its budgetary constraints and the grade-Z origins of its famous director. A good cast tries manfully – with the notable exception of Fonda who is about as animated as a ventriloquist’s dummy in need of a hand up its back – but their characters are never even remotely believable, and react to every increasingly hectic plot twist with a total lack of, well… reaction. Foe example, no sooner is Frankenstein’s beloved torn asunder by his monstrous creation than he’s calmly zapping ten squillion volts through her on the operating table. And peasants who believe in witchcraft tip their hats with only the mildest hint of apprehension or curiosity at Buchanan’s sports car as it motors through their cobbled streets.

The subtext – that, like Shelley’s Dr. Frankenstein, modern-day scientists are at risk of becoming ‘an abomination in the eyes of God’ as they pursue ever more extreme weapons of defence – is never far from Corman’s agenda, and is presented with varying degrees of success. It’s a message inherent in Shelley’s tale and, while the finale, together with the brief prologue, mirrors the beginning and end of Shelley’s novel, the film abandons any sympathetic attitude toward the monster in order to concentrate on its message. Ultimately, the film trips over itself with an unnecessarily confused final sequence in which Buchanan is left alone to face the consequences of his actions.