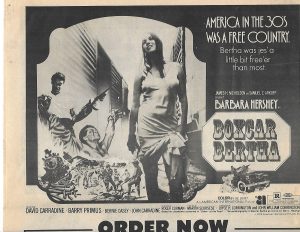 Watching early films by classic directors in the midst of discovering their trademark style always proves to be an interesting endeavor, and Martin Scorsese’s Boxcar Bertha is no exception. Made the year before Scorsese’s breakthrough hit, and first tale of Italian American life on the streets, Mean Streets, Boxcar Bertha shows the legendary Scorsese adapting his own personal narrative style into a different niche, and attempting what he referred to as a “genre picture”. Boxcar Bertha was first pitched as a simple exploitation film, but under the capable guiding hand of Scorsese, the final outcome is a highly enjoyable and surprisingly in depth portrait of the lifestyle and viewpoints of depression era railroad workers.

Even in this early work, Scorsese shows his almost unparalleled ability to create a shockingly vivid and humane portrait of the working class; while the film may not be set in little Italy, the same themes ring true and the characters’ voices are once again perfectly captured, speaking out against repression from the upper classes and the harsh conditions of their everyday lives. Scorsese also demonstrates a knack for creating a particularly believable period look and feel; indeed, the film’s set design is particularly impressive, and the audience seems to live and breathe the harsh fumes of the boxcar at the height of 1920s depression.

It’s also interesting to watch the gestation of several of Scorsese’s definitive film-making techniques, even in an earlier effort – his use of high speed camera zooms, bold, dramatic editing and an aggressive, wonderfully bluesy musical score may seem slightly out of place for a film such as this, but these are all vintage Scorsese moments, which, when identified as such, just make the film all the more enjoyable. There are also some moments of not so subtle religious allusions, most memorably a gruesome and hard to watch scene involving Big Bill Shelley near the film’s conclusion, another Scorsese trademark. However, forced to adapt his vision to the conventions of the style of film he was instructed to make, Scorsese was forced to include several highly unnecessary nude scenes and gunfights with absurdly fake blood, which can prove entertaining on a campy level, though they detract from the more interesting aspects of the film, on the whole. It’s just a shame that the subject matter the budding director was given to work with was so intentionally sparse and simplistic, but the surprising depth and complexity he extracted from what at first appeared to be a simple Bonnie and Clyde knockoff billed as a “true story” only served as a precursor for the brilliant career which was to follow.

Considering the film’s original intent, it is surprising to see such a varied array of talented performances on display. Whether it is a testament to Scorsese’s nearly unparalleled skill as an actor’s director or the enthusiasm and dedication of the cast remains to be seen, but either way, the principle players contribute surprisingly strong performances to the film. As the film’s title character, Barbara Hershey establishes a solid foundation to the film’s acting front, turning a character who could easily be dismissed as repulsive into one who comes across as endearing and hard not to like due to Hershey’s laid back charm. Character actor David Carradine of recent Kill Bill fame also gives a resonant and charismatic performance as ‘Big Bill’ Shelly, the robin hood figure of the railroads. Bernie Casey overcomes his disappointingly underwritten role with a charming and very likable performance as a fellow robber, and Barry Primus is also enjoyable to watch as yet another accomplice, and the only New Yorker in the film. (there had to be at least one) It’s also great to see father and son spar off as John Carradine plays the head of a railroad who is thrown into a battle of wits with the thief and saboteur played by his real life son, and the two quiver with surprising tension and energy during their on screen encounter.

While it is highly unlikely Boxcar Bertha will come across as appealing to a widespread modern audience, there is still much to appreciate here, and the film should be considered essential viewing for Scorsese enthusiasts. Despite the film’s premise as a simple exploitation film, Scorsese found the voice and soul of the time and characters, which resonate almost as fully as in any of his better known pictures. Despite the film’s occasionally choppy plot structure and admittably simple subject matter, Boxcar Bertha is still a highly enjoyable and interesting early Scorsese effort which merits seeing for any fans of the director, stars, or anyone interested in the historical context. Don’t pass this off just due to the Corman exploitation influence – there’s much more to it than that!