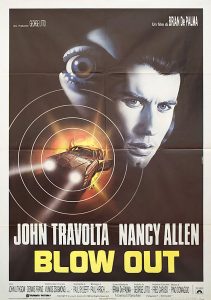 DePalma’s best film by a mile and also as dark as night. It has his moral core but it is unrelenting. Sally set up a politician to be killed; Jack saved her but like his master Hitch she is doomed. Want to understand the movie’s essence?, it occurs in the most brilliant image of Brian DePalma’s career. Sally walks in the station chattering to Jack, as she prattles, the camera pulls back and up to God’s eye and with the black angel of death towering over her horrifically: that is Brian DePalma. This is the entire movie in one single image. Jack saved her but she must die. She was manipulated by Manny but she caused another’s death; her fate is sealed. Like Marion in PSYCHO, she must be destroyed. Jack is not Caul from THE CONVERSATION who hides within his technology from the horrible things he has done to people, for a handful of dollars. He flees into the minutia of recording, speaks as laconically as possible, running from people. Jack uses his skills to trap the murderer, sadly, he starts the unstoppable concatenation of events that end up with Sally dead on the steps. Notice the existential and moral differences between the characters, actually, Jack is morally opposite of THE CONVERSATION’S Caul.

The film is like midnight. It is not for kiddies. Lithgow’s Burke is one of the coldest monsters ever depicted in film. He begins shadowing Jack, killing hookers, so that his real target Sally will be lost among the victims. His garroting and hanging of a hooker in the restroom, with her kicking legs, is one disturbing scene. Notice how you do not need gallons of blood to be frightening. Hitchcock and DePalma imply not show; the mark of directors who possess minds. The film is unyielding; the ending doomed it at the box office. I admire Brian’s courage to make the ending that I assure you Hitch would have made. With the fireworks exploding, as Jack ascends the stairs all of you who have cared for, like me, dying people know what he is going to experience. As he pulls him off her, sees her dead, grabs her and holds her: it models the hardest of all duties, caring for the doomed.

The film does not show Jack’s suicide but it does not have to. His producer has the scream he coveted never grasping what the sounds mean. Jack does now. Like SNAKE EYES, where Rick sees the blood on the money, truly for the very first time. “I never killed anyone before,” hear the realization in his voice. Here, the screams destroy him. We last see Jack on a winter bench listening to Sally’s screams of terror. He rams his hands over his ears; they destroy him. DePalma like Hitch wants you to see that some goodness will obliterate you; it is still worthy of doing. He paints morality in both movies as quite expensive. It is a bit more than sending the positive energy. Rick, in SNAKE EYES, loses everything. Jack, in BLOW OUT, is destroyed. We know what the screams will do to him. Yet, even when it destroys you, it still is worthy of doing. The master’s best movie by a mile.