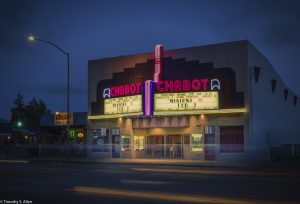 The Anthony Theater in Anthony Kansas, 539 seats, The Blakely Theatre in Blakely Georgia, 300 seats, The Ready Theatre in Niles Michigan, 1000 seats, The Rialto in Beevile Texas, 542 seats and last but not least The Uptown Theatre in Sedalia Missouri, 779 seats. What these theatres have in common is that they were either closed or in disrepair and through community engagement are in the process of renovating and re-opening. That’s right, 336 older theatres are in the process of some kind of re-birth. Communities throughout America are on a grass roots level rediscovering the importance of a movie theatre for small towns and cities. Downtown cores which had wondered why they had lost their souls and instinctively pointed their fingers in the direction of Wal-Mart are springing to life once again because of the resurrection of their downtown movie theatre.

People are slowly realizing that with the walls of any small town theatre lies the potential to re-invigorate an ailing economy. People come to the movies, people linger before the movies, patronize a local restaurant….linger after the movies and engage in conversation at a local watering hole. In 2015 there were 756 town and or cities whose population was between 25,000 and 49,999, many of these town or cities suffer from a malaise.

Before World War II, Main Street was the community’s primary commercial hub. Downtown buildings usually had several tenants typically a ground-floor retailer and, frequently, several upper-floor offices or apartments; together, these tenants provided enough rent for property owners to keep their buildings in good condition. The presence of the post office, library, banks and local government offices added to the steady flow of people downtown. Not only was Main Street the center of the community’s commercial life, it was also an important part of its social life; people thronged the streets on Saturday nights to meet friends, see a movie and window-shop.

In the past 40 years, America’s downtowns have changed drastically. The creation of the interstate highway system and subsequent growth of suburban communities transformed the ways in which Americans live, work and spend leisure time. With improved transportation routes, people found it easier to travel longer distances to work or shop. Roads that once connected neighborhoods to downtown now carried residents to outlying shopping strips and regional malls. Throughout the nation, in town after town, the story repeated itself. Downtown businesses closed or moved to the mall, shoppers dwindled, property values and sales tax revenues dropped. Some downtowns sank under the weight of their own apathy. Neglected buildings, boarded-up storefronts and empty, trash-strewn streets gradually reinforced the public’s perception that nothing was happening downtown, that nothing was worth saving there. People forgot how important their downtown and its historic commercial buildings were in reflecting their community’s unique heritage.

But with the advent of digital commerce and services like Amazon , malls and shopping strips are seeing a rapid decline.. Internet sales reached six per cent of total retail spending in the fourth quarter of 2013, nearly doubling their share from 2006. Some retailers, understandably, are responding by focusing more on the online end of the retail business. Gap, which became synonymous with the American mall, is no longer counting on malls for growth. “Culturally, the business pivoted towards digital,” Glenn Murphy, the C.E.O., said, describing the past year. “Mall traffic, for a number of years, has been slowing down. Whether it continues to decline somewhat over time, I think that’s realistic to assume.” Gap customers now can order clothes online and pick them up in a store. When it opens new stores this year, Gap will focus on Asia; earlier this month, the company launched its Old Navy brand in China. Sound familiar?

Dozens of shopping malls across the US are struggling to survive. More than two dozen malls have shut down in the last four years and another 60 malls are on the brink of death,. In 2014The New York Times predicted last year that about 15% of US malls would fail or be converted into non-retail space within the next 10 years. That was an increase from two years earlier, when it was predicted said that 10% of malls would fail or be converted. That trend will rise exponentially. The era of the great American Mall is coming to a nasty end. And the mall, is where most of our multiplexes reside.

This weekend The Historic Artcraft Theatre is showing the 1993 film, HOCUS POCUS starring Better Midler, Kathy Najimy and Sarah Jessica Parker. Three sold out shows of 623 people. By the way HOCUS POCUS is on DVD, Netflix and Amazon…..but they still came. Last week they did the same thing with the 80’s classic HOOSIER. When was the last time your theatre had two sold out weekends. They are showing beloved classic movies (at a far reduced rental rate that a new Disney release) but they truly selling the experience and the sense of community. They don’t worry about windows or third party ad campaigns…they sell to an audience which they grew from the ground up.

336 primarily single screen theatres are currently being renovated in smaller centers. If these folks take a page from the Artcraft we might just be able to get America to fall in love with going to the movies again.

Give the people what they want to see…and well darn it they just might show up. It might be that truly that in the word’s of Shakespeare…”what is past is prologue”