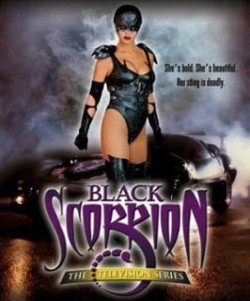 The Hunger Games is coming. Struck by photos of Jennifer Lawrence — in character as Katniss Everdeen – coolly aiming bow and arrow at her prey, I started remembering back to the bold, tough heroines favored by Roger Corman. From his earliest films onward, Roger liked women who were neither shrinking violets nor clinging vines. The typical Corman heroine is more like a cactus, soft and juicy at the center, but prickly as hell on the surface.

Take Beverly Garland in Roger’s 1956 western, Gunslinger. She played a frontier gal who put on the sheriff’s star after her husband was slain by outlaws. Naturally she did a lot of riding, shooting, and rassling, while also playing a lusty romantic scene staged, for some reason, in a tree. Alas for Garland and male lead John Ireland, said tree was home turf for a colony of red biting ants – ouch!

To make a Corman movie, especially in the early years, women had to be tough off-screen as well as on. The seven-day rain-sodden shoot was so taxing that co-star Allison Hayes, who played a conniving saloon keeper, legendarily snarled to Roger, “Who do you have to fuck to get off this picture?” But she got no reprieve, even when she fell from a horse and broke her arm. Garland described for me years later how she herself badly sprained her ankle during a scene that required her to run down a flight of stairs, then leap onto a horse’s back. The following day, with the movie’s climactic cat-fight scheduled, she couldn’t even hobble, until Roger summoned a mysterious doctor with a large syringe: “And in a few minutes I could walk, I could jump, I could do everything. And I worked all day.” Ultimately she paid the price: “I didn’t work for three or four months after that, because I couldn’t walk very well. But that’s Roger; the show goes on.”

Other Corman heroines were equally feisty and physical, with a strong penchant for taking charge. Long before Ripley kicked intergalactic butt in Alien and its sequels, Pam Grier was showing (in films like The Big Doll House and The Arena) that women are hardly the gentle sex. I was at New World Pictures when Roger persuaded Angie Dickinson to star as Wilma McClatchie, a one-woman Bonnie-and-Clyde who robbed the rich and kept the loot in Big Bad Mama. Typically for a Corman film, Wilma had her soft side (she loved her two nubile teenage daughters) and her sexy side (she loved both Tom Skerritt and William Shatner). But she was also mighty handy with a gun, and she never backed down when the going got tough. Just as our production ended, Angie won the top role on the Police Woman series: TV has never been the same since.

At Corman’s Concorde-New Horizons, we created scores of plucky heroines. Over the years we introduced strong female cops (Silk), strong female martial artists (Angel Fist), and strong female superheroes (Black Scorpion). We gave the late Lana Clarkson her signature role, as the Amazonian leading lady in the sword-and-sorcery epic, Barbarian Queen. Of course these smart, savvy females all had great bodies, and performed feats of derring-do while wearing next to nothing. When the Black Scorpion character (lady cop by day, superhero by night), found her way into a Corman-produced TV series, Roger proudly told TV Guide that “where we economized was on the Scorpion’s costume—it doesn’t cover up a lot of her.”

Corman heroines were never meant as role-models for little girls. It was definitely their big brothers we were keeping in mind.