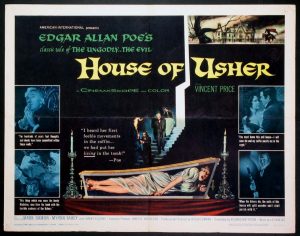 Roger Corman’s brilliant adaptation of Edgar Allan Poe’s chilling tale is one of the greatest achievements in cinematic horror. It’s hard to pick one of Corman’s Poe adaptations as the best, but this, the first, might be it.

The movie is fairly faithful to the story, but extremely faithful to the tone of Poe’s writing. No one but the team of Corman and writer Richard Matheson could pull it off like this. Poe’s deranged sense of dread and sardonic humor are all here, in every shot.

Vincent Price turns in one of his finest performances as Roderick Usher, a man who is glad that he and his sister, Madeline (the wonderful Myrna Fahey) are the last of their bloodline, as he believes the family is doomed to all eventually go mad. He also suffers from hyper-sensitivity, and must have quiet, dim light, soft clothing and bland food, otherwise he suffers extreme pain. Whether this is a physical or psychological anomaly is never confirmed.

Madeline’s fiance Philip (Mark Damon) comes to the house to claim Madeline as his wife. Roderick forbids it, believing he and his sister should die together, thus ending the Usher line of insanity. But it may be too late, as Madeline is already showing signs of flipping out, and Roderick has some pretty twisted ideas of how to stop that from happening.

The movie leads up to a spine-tingling finale that’s as intense and scary a climax as anything I’ve seen. HOUSE OF USHER is a great horror movie, and perhaps the most faithful adaptation of Poe, both in content and style, ever filmed.