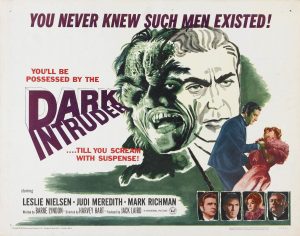 Long before he became an immortal slapstick icon with his role as Frank Drebin in “The Naked Gun” (and became typecast as such until his death), Leslie Nielsen actually was a pretty versatile actor and appeared in numerous cult movies. He starred in the classic fifties Sci-Fi movie “Forbidden Planet” and in the schlocky seventies eco-horror flick “Day of the Animals”, for example. Very few people know, however, that Leslie was also the star of this unsold and meanwhile long forgotten pilot episode of a supernaturally themed period series entitled “The Dark Cloak”. The pilot film – with an extremely short running time of barely 59 minutes – takes place in the year 1891 in the moody and fog-enshrouded streets of San Francisco. Nielsen is Brett Kingsford, a rather eccentric private investigator specialized the occult. He has a midget butler named Nikolai and doesn’t want the world to know that he collaborates with the police, so he disguises whenever they meet to discuss a case. The city is plagued by a series of violent killings, seemingly committed by a monstrous being. Robert Vandenburg, a personal friend of Kingsford who’s about to be married, fears that he commits the murders in a sort of trance, but our paranormal investigator suspects there is another explanation.

The Brett Kingsford character is intelligent and slightly arrogant, like Sherlock Holmes, and Nikolai often acts like a miniature version of Dr. Watson. The monstrous murderer is very much like Mr. Hyde (the malicious other side of Dr. Jekyll), while the timing and decors immediately remind you of numerous movies about the infamous Jack the Ripper stories. Most likely these are all the reasons why the TV-series never came and “Dark Intruder” remained an independently released feature film. It’s too reminiscent to a lot of other movie franchises and potential sponsors probably didn’t want to get accused of being derivative and/or unoriginal. But it nevertheless remains a damn shame that “Dark Intruder” became so obscure, as it’s a splendid mystery/thriller with a compelling and convoluted plot, witty and creative comical elements and great performances. The murders as well as various other sequences are tense and hugely atmospheric. The script contains some delightful dialogs, like: “I sense strong psychic indications in this room. Yeah, try using that in court!” and the climax has a nice unexpected twist in store.