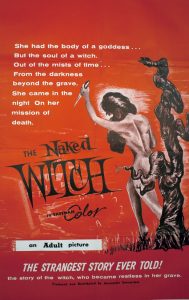 This 59 minute movie starts off as a documentary on witchcraft and it’s slightly interesting for what it is. Then, around the ten minute mark we switch gears to an actual “movie” about a student who is doing research on witchcraft and comes across the grave of a witch. The witch returns and is sometimes naked. However, she’s not naked enough to earn the title THE NAKED WITCH, which was obviously just a way to get creeps like me to watch the film.

This was co-directed by Claude Alexander and Larry Buchanan but it seems the majority of the “student” footage was from Buchanan. I’m really not sure why his name isn’t brought up more when people discuss some of the worst directors of all time because he has certainly made some major stinkers and this here is one of the worst. Even though this turkey clocks in at less than a hour it’s still rather hard to sit through and it’s just about as boring as watching paint dry. The incredibly dry narration will have your eyes drying out to the point where you’ll want to take a nap.

Apparently this originally played on television in B&W but the print I saw was in color. Also, while there’s a limited amount of nudity, some of it appears to have been blacked out with a marker of some sort. Yes, it looks that cheap and bad. I’ve read this happened by the distributor but I don’t know the whole story. Either way, THE NAKED WITCH is pretty pointless and only for those who enjoy really bad movies.