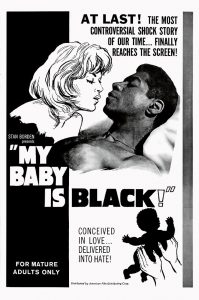 The subject of race and sexual relationships is even a hot button topic in our world today, so it was probably almost taboo to broach the subject in the 1960’s. Yet, that is what this little French films tries to do. And I stress “tries,” because the inept way the subject matter is handled ruins what could have been an interesting and thoughtful drama on the issue.

The story revolves around a young French woman named Françoise (played by Françoise Giret) who falls in love with a black man named Daniel (played by Gordon Heath), as she is forced to deal with some of the unsavory complications interracial coupling brings in the 1960’s.

As I said, it is some very heavy subject matter to explore. That’s why it is such a shame that very little exploring is actually done on it. Oh, there is a lot of (dubbed in) talking about the struggles and strife interracial couples go through, but very little of it is actually shown until near the end of the film. Much like the college professor here (played by Aram Stephan) does in his class, it’s all talk, talk, talk! We are rarely shown Françoise and Daniel actually dealing with the bigotry and racism they complain about and we would expect them to face. They spend much of the film walking around the city and in the bedroom, musing over what it means to be a black man in a white man’s world, or how hard it is for an interracial love to survive in those modern times. In a film that is trying to tackle such serious themes, not showing very much of the conflicts within those themes shows an inexperience that borders on the insipid. Like someone telling you what it’s like to be in love, without ever having been in love themselves, the film has no spark, heart, or soul. It makes a lot of sound, while knowing little of what it is actually talking about.

Much of the rest of the film is spent watching unrelated material dealing with the bohemian group that Françoise and Daniel hangout with. It doesn’t really add anything of real value to the story, but feels merely like filler material to pad out the film’s 77 minute run time. Some of the cinematography tries to play at an artsy feeling, some of which works (like a scene where Daniel is out walking in the snow) and some of which doesn’t (like a close-up shot of their feet, when they come together for a meeting on a bridge). There really is little in the background elements that brings out any real interest, which only goes to reinforce the lack of interest in the main subject matter.

I’ll give the filmmakers a couple points for trying to tackle what was a very touchy subject, both then and today. But the complete mishandling of that serious subject matter tarnishes any nobility in the points and issues they were trying to make. Their reach most certainly exceeded their grasp here. This could have been a very evocative drama of its time. Instead it’s just a meandering bore, that talks more of a good game than it actually delivers. Unless you are looking for pointers on how NOT to tackle such material, you can easily give this one a pass!