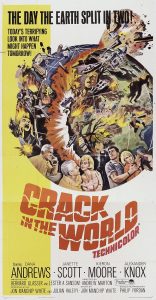 It is hard to look at some movies as being little more then a list of clichés. A story about a group of scientists attempt to unlock what they hope will be a vast depositary of energy and minerals underneath the Earth’s crust that leads to unintended consequences for the entire world, 1964’s Crack In The World would certainly be one of that type. So should you watch it?

The acting in the movie is good for the most part. Leading the cast is Dana Andrews as Dr. Stephen Sorenson, the head of the group of scientists, and indeed gives perhaps the best performance seen in the entire ninety odd minutes the movies runs for. Playing his much younger scientist wife is Janette Scott as Maggie, whose performance goes from most believable at the beginning before she turns into the clichéd screaming female character out of innumerable sci-fi films of the era. Completing the main cast is Kieron Moore as Dr. Ted Rampion, who not only predicts certain disaster but is also a former flame of Maggie’s, which given the lack of chemistry between Moore and Scott seems hard to believe. Indeed there is a distinct lack of chemistry between all three of the leading cast members. While both Andrews and Moore give good performances, the lack of chemistry between not just themselves but Scott doesn’t help the movie.

The production values are as mixed as anything else in the movie. The production design of Eugene Lourie is perhaps the biggest strength of the whole movie, particularly with its impressive set of the project’s operation center. The special effects though are mixed as they range from the excellent models and effects seen during the first thirty to thirty five minutes to the film to some incredibly unconvincing back projection work as the movie reaches its end. Other production values, such as the score by John Douglas and the direction of Andrew Marton, give the entire film a very dated feel. The editing of Derek Parsons is also very much of the era, meaning that despite running a little over ninety minutes the film drags horribly along during that time. The result is that the movie looks good for the most part but heavily dated and slow moving as well.

Nothing though dates Crack In The World more then its script by Jon Manchip White and Julian Zimet. The script has a neat idea as its basis: that the Earth’s crust, weakened by decades of nuclear tests, could be cracked open and threaten all life on Earth. A neat idea, though it went out of date the year following the movie’s original release. But the premise is an intriguing one though its execution is anything but. The script throws in every cliché it can seemingly come up with: a love triangle between two rival scientists (one older, one younger) over the former’s wife, the prediction of catastrophe ignored, a failed attempt to avert disaster and fleeing members of the general public being killed as they do say to name but a few. The result is a neat idea bogged down by a list of clichés.

Despite the occasional good performance and a neat (if outdated) idea as its basis, Crack In The World is weighed down heavily by the many, many clichés it employs along the way. It also doesn’t help that the film is horribly dated by much of its production values as well. The overall result then is that the movie is watchable, if only just.