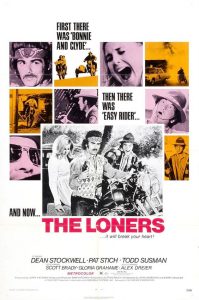 I would say this movie would be most interesting for Dean Stockwell fans. He looks great and is certainly the best thing about this outing. Plotwise, THE LONERS is a cross between EASY RIDER and BONNIE and CLYDE. This should have been a good idea considering the era the film was made and the tremendous success of those flicks. However, the editing is pretty bad, and the writing is just plain non creative and at times absurd (especially the scene where the dimwit goes postal and murders no less than six people in a restaurant, that was way over the top). For the most part the cast is pretty bad. Hollywood legend Gloria Grahamme does a fine job as a flaky, oppressive mom. She plays her part tongue in cheek which works fine. Another veteran actor, Scott Brady, is mostly wasted in a badly written role as the revenge seeking cop. The actor that tried to run over Dean’s character in the opening scenes was very good but we didn’t get to see much of him. Overall, I was mildly entertained, it was fun to see Stockwell in his prime and it was cool to get another taste of the “rebellion exploitation” film making that made such an impact during the sixties and early seventies. Definitely worth checking out for Dean Stockwell fans. One more thing, the leading lady didn’t really impress me much, I’m betting she got the part because of her nice bosom which was displayed quite a bit throughout the movie. I would say that for that reason alone she contributed a couple of the THE LONER’S “highpoints”.