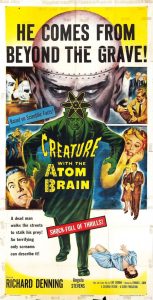 Fans of late night 1950’s science fiction remember this not as “Creature with the Atom Brain” but as the movie with Uncle Dave. John Launer (in his first movie role) played police Capt. Dave Harr, whose niece was seven year old Penny Walker (Linda Bennett). Care is taken early to show that Penny adores her Uncle Dave and late in the story (in the most famous scene in the whole 50’s sci-fi genre) he visits her on her birthday. But it is the re-animated Uncle Dave, whose changed voice Mrs. Walker credits to a cold. She leaves Penny in the living room with Dave and goes into the kitchen. Penny then gives Dave her doll Henrietta. Cut to Mrs. Edwards startled face when she hears Penny screaming in the living room. Poor Henrietta!

Launer pretty much steals the film from the rest of the cast, both before and after he is killed. As Captain Harr he cracks wise in every scene and his dialogue is actually extremely funny.

The background involves the deportation of Frank Buchanan (Michael Granger), an American gangster who vows revenge and finances a not so mad German scientist (Gregory Gaye) who is developing a process (based on then trendy radioactivity) to animate dead bodies. They set up a laboratory in the lead lined walls of a LA mansion, steal a few bodies from the morgue, and begin a cottage industry of wiping out Buchanan’s list of enemies.

The scientist spends most of his screen time complaining about the corruption of his noble experiment for evil means. The set design for the lab is unexpectedly elaborate and the sequences of the two men crawling around in a 1950’s idea of radiation suits are especially effective.

One of their creatures in the climatic scene looks a lot like Treat Williams. This scene has a “Night of the Living Dead” flavor. Although the authorities have discovered that the bodies are controlled by electrodes surgically planted in their brains, they conveniently fail to mention this to the police and national guardsmen who are fighting the monsters; allowing the climatic scene to continue until other means are found to deactivate the creatures. Up until this scene, the movie deliberately used almost entirely wide master shots, much like the “mise en scene” (limited editing cuts within a scene) technique of some Hitchcock films. Probably done for budget reasons, it serves nicely to set up the climax, which is full of sudden cuts to extreme close-ups of the walking dead. This must have been quite frightening on the big screen, particularly after being accustomed to the more distanced style of the first sixty minutes of the film.

I suggest that potential viewers ignore the IMDb voting, this is a scary horror/sci-fi film done with a trace of self-parody. Another one of Producer Sam Katzman’s money making B-movies; where he exploits the growing fear of a nation learning to deal with the atomic age, and its fascination with the concept of radioactivity.