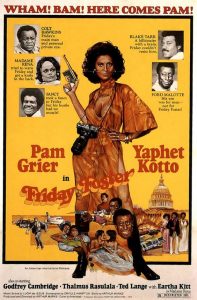 Friday Foster (Pam Grier) is a magazine photographer who is given the assignment of covering the airport arrival of the richest black man in America. But Friday gets more than she bargained for as this routine assignment turns into an assassination attempt. Because Friday was able to get some shots of the would be killers, her life is in danger. Soon, everywhere she goes, people end up dead. Friday’s investigations lead her to corrupt government officials, a renowned preacher with an eye for more than the Bible, and something called The Black Widow.

Friday Foster is literally a Who’s Who of 70s black actors. In addition to the always delightful Pam Grier, the movie features Yaphet Kotto, Eartha Kitt, Scatman Crothers, Carl Weathers, Ted Lange, Godfrey Cambridge, Thalmus Rasulala (what an awesome name), and more. While many members of this large cast have little more than cameo appearances, it was a fun to see them all together. I especially enjoyed seeing Kotto work with Grier. I wish the pair had made more films together. They have a good on screen chemistry. Plus, regardless of how silly the situation, Kotto brings an air of credibility to the proceedings.

Unlike some of Grier’s other films, Friday Foster has a decided lighthearted tone in comparison. That’s not to say there aren’t plenty of killings, but it never feels as depressing, downbeat, or serious as something like Coffy. It’s a nice change of pace to see Grier laughing and joking with Kotto in many of the film’s scenes. The action scenes are also good. One of my personal favorites is the rooftop chase with Kotto and Weathers. Very nice.