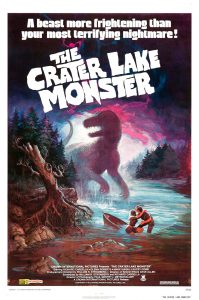 This movie is a great Drive-Inn 70’s Sci-Fi / Thriller I know most people give it bad comments though. Since it was supposed to take place at Crater Lake instead because of the low budget limitation it was filmed in California at some land formed lake up there. Anyway the lake is dark, murky & a good bit of it leaves behind that creepiness image & feel that Loch Ness gives you. Not the greatest acting but I guess good enough for this type of B-Drive Inn Sci-Fi Film. What makes this movie so great u ask? Any fan of Stop-Motion Animation knows of the great David Allen who followed in the footsteps of the stop-motion legends Willis O’Brien & Ray Harryhausen. He was inspired by them in the early 1950’s as a young boy he saw some of their films on television. The Plesiosaurus which is a prehistoric water reptile from the Dinosaur ages that has a long neck razor sharp teeth & four flippers with a tail. It can walk on land as well. The attack scenes depicted in this film handled by Dave Allen using Stop-Motion Animation. Then some scenes in the water had like a fabricated head made for some of the close up water attack shots & a few other shots in the film. The Loch Ness Horror (1982) also has a Plesiosaurus in it which is supposed to be what Nessie is the nickname of The Legendary Loch Ness Monster of Scotland. Same with the lake monster that’s in Lake Champlain in Upstate New York. Champ is the nickname & that is America’s Loch Ness Monster. Back to Crater The Stop-Motion Animation in this film is some of the best Animation I have ever seen. This is one of his early efforts not to mention also. Equinox from 1970 was his first big break & that film earned a huge Cult following by Sci-Fi, Horror & Fantasy Film Buffs like myself. I also just got that 2 Disc DVD Special Edition Set from Criterion Collection I have checked some of it out awesome stuff. I can’t wait to watch both versions of the films this weekend with the extras on Disc 2. Anyway back to Crater Lake Dave was assisted by Jim Danforth & Randall William Cook two other great Stop-Motion Animators Danforth that was focusing on more matte painting on Films at that time since Stop-Motion was becoming obsolete. His last film he did in which he did all the animation on was When Dinosaurs Ruled The Earth (1970). Which he earned an Oscar for Best Visual Effects in America & that is a British made film. He started Matte Painting on that film as well while still doing Stop-Motion also. But Equinox he only does Matte Painting & most of the films after Equinox too. He does some assistant animation occasionally & other animation though. Jim Danforth he loves animation he thinks it gives that feel & look that CGI doesn’t give cause it is too real the same was said by Ray Harryhausen. I agree with them both I prefer Stop-Motion Animation over CGI myself. Dave Allen’s Animation in Crater like steals the show it is what makes the film worth watching. Otherwise if there was no great Stop-Motion either done by Willis O’Brien, Ray Harryhausen, Pete Peterson, Jim Danforth, David Allen, Randall William Cook, Phil Tippet, Jim Aupperle, Doug Beswick, or Dennis Muren which is an exceptional animator the others are the best animators out there. My point is without Dave Allen’s Animation or one of the other greats I mentioned which Willis O’Brien passed away in the early 60’s so he couldn’t do the animation obviously. If u are a huge Stop-Motion Fan like me then u will really enjoy this movie. Other then that stay away I guess unless u are a fan of Drive-Inn B Sci-Fi Films with great special effects & low grade everything else. It is one of my favorite 70’s Sci-Fi Flicks anyway.