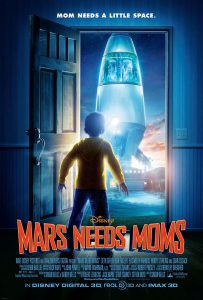 This was quite a surprise: A Disney family movie rated PG with creepy animation, lots of dark scary scenes, aliens, homicides and attempted homicides and more! Why make a movie about children’s mothers being abducted by aliens and murdered in some kind of giant laser machine? I guess it will grab kids’ attention, but it will also scare them to death.

Aside from the crazy story line, which is not child-friendly, we have a new kind of animation that makes computerized characters look very much like real people. So, for example, the supposed 11-year old boy was modeled by a 35-year-old man, so that the kid looks like a cross between a kid and a middle-aged man. The forehead is expressive, but in a 35- year-old-man kind of way. You have to see this to understand. It is weird and a little scary.

Frightening, realistic aliens and robots chase a child while shooting at him with their ray guns, trying to kill him. They also try to kill his mother. They attempt to execute his friend in a firing squad. This all takes place in a dark and scary world where people run through long tunnels and dive into dirty chutes to spend some time in a giant fiery trash dump. The dump is inhabited by a monkey-like species of “stupid” creatures who wear primarily yellow, red and green clothing and have their hair in dreadlocks. I’m not kidding.

The character called Gribble, played by Dan Fogler, was an exception to the general drudgery of this film. He had a strange part to play in a weird script, but he brought a lot of energy and enthusiasm and a really unique style. It wasn’t enough to save the movie, but he added at least two stars to my rating. The animation quality is good, but these days it’s hard to count that for much. The story is just terrible and that’s what really matters. Sorry, Disney, but I know you will overcome this setback.