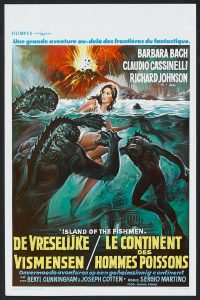 L’Isola degli Uomini Pesce is a very entertaining retelling of the Island of Dr. Moreau. It is 1891 and Claudio Cassinelli is shipwrecked on a mysterious island with a few newly escaped convicts. Claudio comes across the stellar Barbara Bach and Richard Johnson. Johnson plays the dastardly Edmund Rackham: a man who is able to manipulate scientist Joseph Cotton into turning the local native population into amphibious deep-sea diving creatures, (they look like a cross between the Black Lagoon creature and one of The Humanoids From the Deep), by convincing Cotton that the mutations are being created for the highest of scientific and humanitarian motives.

Having discovered the lost city of Atlantis, Rackham is using the amphibious creatures to loot its treasures. Sexy Barbara Bach plays Cotton’s daughter who has a psychic link with these mutations. In one memorable scene, Bach takes a midnight swim with these mutants wearing only a thin white cotton dress that leaves little to the imagination. Claudio discovers one of the convicts he has befriended has been turned into a gill-creature and then all Hell breaks loose.

Filmed at the same time and in the same location as Zombi 2, Richard Johnson didn’t even have to change suits between films. The house where the experiments take place is the same house Johnson uses to conduct experiments in Zombi 2. Talk about economic filmmaking!

The additional footage features a few bloody beheadings, (way to go Roger!), and a laughably bad Cameron Mitchell doing his best pirate imitation. All that’s missing is the parrot.