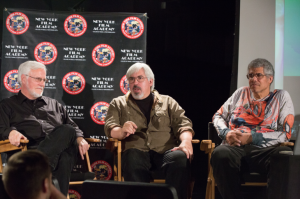 On August 28th, 1895, in West Orange, New Jersey, in Thomas Edison’s studio, an employee named Alfred Clark shot the historic dramatization The Execution of Mary, Queen of Scots, in what is regarded as the first visual effects sequence in the history of film. Illusion has been a part of movies since their invention. Frenchman, Georges Melies realized that magic and movies were a perfect combination and began to make his series of short films, often devoid of plot but filled with the emerging wondrous artistry we now call special effects.

Between 1896 and 1912, Méliès created over 500 films, combining stage trickery with early optical effects to produce some of the most well-known early special effects films. These include The Man with the Rubber Head (1902), A Trip to the Moon (1902), The Dancing Midget (1902), The Impossible Voyage (1904), The Merry Frolics of Satan (1906), The Conquest of the Pole (1912), and The Temptation of Saint Anthony. Méliès was also one of the first filmmakers to utilize storyboards and elaborate pre-production art in order to plan his effects. The rest they say is cinematic history.

The Asylum is a rarity in today’s world of filmmaking. Unpretentious, frugal, and prodigious in its output of movies, it really has no equal in today’s cinematic universe. The best comparison can be made to Robert Lippert Studios of the 40’s, American International of the 60’s and of course Roger Corman. The Asylum has been mightily disparaged and many failed attempts have been made at imitation.

For the past 7 years, Joe has diligently toiled at The Asylum, instilling magic into the movies made under the banner of this low budget studio. Since the majority of these movies were fantasy or science fiction, it was left to Joe and his team to bring cinematic sense and logic to Sharks caught up in a tornado, giant piranhas attacking Southern California, dinosaurs, hordes of zombies and many other unlikely settings and participants. Joe would turn out these effects at an unheard of rate, often producing effects for several pictures at the same time. Sometimes his work was the subject of unjust derision, I would challenge anyone to produce the kind of quality Joe Lawson does under the time restriction that is imposed with this style and approach to filmmaking.

When I first meet Joe in person, (we are known for having voluminous Facebook conversations) I was greeted by a bear hug. In many ways that hug still lingers. An amazingly warm Celtic pixie of a man, Joe is a cross between Milo O’Shea and Martin Scorsese. What is apparent is that Joe has a rare love and passion for visual storytelling and is keenly devoted to the complete art of cinema. It can be fairly said that for the past half decade Joe Lawson has shaped and guided the art of low budget film globally and particularly the art and manner of low budget special effects. While other large shops came and went, Joe and his team at The Asylum consistently turned out a volume of content unequaled in its audacity..

This week Joe announced that he was leaving The Asylum to establish a special effects company specifically skewed to the needs of the independent producer. It is more than fitting that during the time of transition we thank Joe for his contribution to low budget films, his artistry within these and this passion for the people and the films themselves.

As of the date of this writing, Joe Lawson has had a big part in creating 127 movies.

Thank you Joe…..take a bow and best of luck.