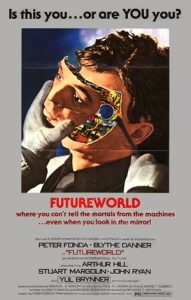 Westworld was the film that put Michael Crichton well and truly on the map as a writer and sometime director to watch out for. His story of an amazing theme park gone wrong was revisited twenty years later, only with raptors in the place of cowboys. It could have been revisited a lot earlier, had Futureworld been a lazy, hurried sequel to it’s successful predecessor. Instead the filmmakers produced something entirely original that stands on its own with no prior knowledge of the first film necessary to the average viewer.

The film begins two years after the disaster at Westworld, with the newly improved theme park Delos ready to open its doors again to the rich and influential public. Peter Fonda however smells a rat, and following a tip-off that all is not well he takes a holiday there himself, with his ex-girlfriend and fellow journalist in tow. Of course it would be a short and uneventful film if he turned out to be wrong, so he doesn’t. He’s right. In fact, things there are worse than he thought, but I won’t give it away here. Suffice it to say that it’s not only the robot technology that has improved at Delos.

Futureworld plays on the question that audiences raised following the release of Westworld – can you have sex with these robots? The answer is yes, and whilst we’re not shown any (this is a family film after all) both the robots and some of the guests discuss it openly. One even quips “Once you’ve had sex with a robot, you’ll never go back!” If Futureworld was a real place, the implications would be scary indeed.

This film seems to have attracted a lot of negative reviews which surprises me, as I felt it was a well paced science fiction thriller. It was produced by American International Pictures, with Samuel Z. Arkoff at the helm, and as such it is a very slick looking film on a very low budget. It never looks cheap, despite some of the costumes looking a little too theatrical. And why shouldn’t they? After all, it’s a holiday camp, not a re-enactment society.

I would recommend Futureworld to anyone who is a fan of Westworld, or of seventies science fiction in general. I would imagine if you’re reading this you probably fit into the latter category!