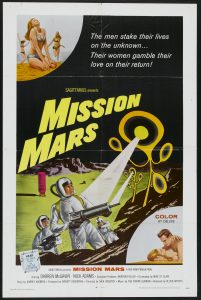 This is a strange oddity of a film. It’s poorly made in all respects, some scenes have the cinematography and production values of a porn film, yet Darren McGavin and Nick Adams both wound up in this doing the best with what they had. It was shot at the *very* cramped Sagitarius studios in Miami, sometime in late 1967 in someone’s attempt to make a “Miami Hollywood” area in Florida. Adams was in a career slump at the time and had personal problems(divorce and custody battles which ensued) which probably led him to accept a role for any money he could get. He apparently got a severe sun burn during his mini-vacay stay in Miami which is why he looks red as a beet in several scenes(not from embarrassment) Sadly this was also Adam’s last film he made, before his untimely and mysterious death in Feburary 1968-he never got to see it. It was the second time in his career he would play an astronaut-the first was the superior Toho film MONSTER ZERO(Kaiju Daisenso, 1965 which was released in the US in l970,also after his death). McGavin must have also needed money too for a couple of mortgage payments,or wanted a Florida vacation, or someone knew him and he did a favor. He looks closest to the age of his character Kolchak which would be five years in the future. The FX work is very cheap, it is rife with NASA Apollo footage(easy and cheap to get at the time). Some attention was paid to the miniature Martian landscapes and at least they hold some accuracy and detail. The rest of the miniatures such as the alien “Polarites” and the aluminum foil alien device, look badly done and,like the best efforts of 8mm home made SF films some of us did in our youth.