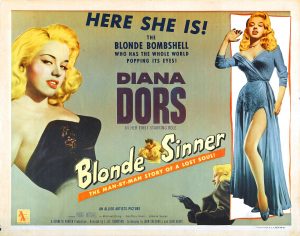 ‘Yield to the Night’is a child of its time, the mid fifties. Set against the grim background of the condemned cell in what is presumed to be Holloway prison (the only hanging prison for women at that time),it is a strong statement against capital punishment in general, and for a condemned woman, in particular. By 1956, popular opinion in Britain had turned against the death penalty, fuelled by a series of unpopular executions, Derek Bentley, the educationally subnormal youth hanged in 1953 for the shooting of a policeman on a Croydon factory rooftop when his seventeen year old accomplice, Chris Craig, had fired the fatal shot (Craig was too young to hang); the executions of two women in quick succession, Louisa Merrifield and Stylou Christofi, and the cause celebre of Ruth Ellis, who shot her lover, David Blakely, outside a North London public house.

Obviously Ellis was the inspiration for Dors’ character, Mary Hilton (both blondes, both shoot their lovers while emotionally distraught). Director J. Lee Thompson had worked with Diana Dors in the 1954 film ‘The Weak and the Wicked’, which, like ‘Yield to the Night’, was based on a book by Joan Henry. Times had changed, even during those two intervening years, and Thompson yearned for a broader, more hard hitting statement than his earlier offering. The action scenes are much pacier, with quick scene changes and remarkable (for its day) camera angles – the shots of Dors around a fountain amount to a cinematic work of art, and the murder itself is a tour de force of close ups, almost unbearable suspense and facial expressions (note the face of the uncredited cab driver when he realises what Mary has done).

We skip the trial to the first prison scene where the governor, played to perfection by that most authoritative of actresses, Marie Ney, informs Mary that her appeal had been denied. Geoffrey Keen, as a thoughtful chaplain, leaves the cell when Mary’s lawyer appears, played by the veteran Charles Lloyd Pack, with an optimism that borders on insouciance. Mary settles into the daily routine, comforted by Liam Redmond, as the caring doctor. Flashbacks trace Mary’s failed romance with Jim, a once ambitious pianist whose inner emotions are in turmoil, who is reduced to playing in nightclubs and acting as a third rate host, dancing with various women, including Mary’s nemesis, the well heeled Lucy. Mary is besotted with him, but he is fatally attracted to Lucy, fuelling Mary’s inveterate hatred for her. Jim commits suicide, leaving a note that is addressed to Lucy, pushing Mary over the edge. The flashbacks are not as convincing as the rest of the film, but perhaps that is due to their nature – we already know that Mary has shot Lucy, so the lead up to that cataclysmic situation is somehow diluted.