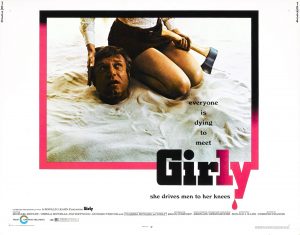 Fans of British horror and black comedy should definitely track down this Freddie Francis film, which was not imaginatively marketed at the time of its release and was never able to connect with its proper audience. I saw this at the base theatre during my Air Force days. Films on base only ran for only one day (three shows) and this was one of a handful that drew capacity crowds to the second and third shows due to “word of mouth” praise by those who attended the first screening. If you liked Jack Hill’s “Spider Baby” (1968) you will love this film as it appears to have served as Francis’ inspiration.

Originally titled “Mumsy, Nanny, Sonny and Girly”, the title was shortened to just “Girly”, appropriate since Girly is the main character. It is definitely a product of its times. Imagine mixing “The Beguiled” with the television shows “The Avengers” and “The Prisoner”. Francis was primarily a television director.

Like those shows, much of the humor comes from presenting extreme characters and situations as if there they are nothing exceptional. In this case a nutty family of four (insert original title here) which includes a brother and sister far to old for their school uniforms.

Vanessa Howard plays the title character with a lot of sizzle and will remind viewers of Tisha Sterling, especially Sterling’s portrayal of Ma Parker’s daughter Legs on the Batman television show. She has a lot of fun with this role alternating instantly between playful child, coquettish flirt, and violent psychopath. Howard is a genuinely fine actress, although in “Girly” her short skirts and provocative scripting make it hard to concentrate on her acting skills.

This happy family lives on a large estate just outside London and amuse themselves by luring men there to serve as the children’s playmates in various games supervised by Mumsy (Ursula Howells) and Nanny (Pat Heywood). When these new friends outlive their usefulness they are dispatched in novel ways and “sent to the angels”. The last new friend believes himself a murderer and in time actually wants to become part the family, or anything else involving Girly. This sets things up for a cute twist at the end as Francis examines the fragility of sanity.

The best scene is a slick little seduction sequence around the pool table. As the new friend looks on Howard places a doll in each pocket and calmly circles the table, driving a ball into each doll’s face. At the same time she keeps up a monologue about the punishment her playmate will receive if he should try to leave. Very cool.