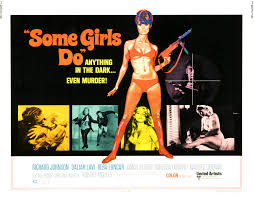 This sequel for the 1966 trash classic “Deadlier than the male” is quite a disappointment compared with the original spy movie. There are good bad movies and there are bad bad movies. This one’s medium bad. The film has a great storyline (in exploitation terms), but suffers from being quite unfunny and kind of lustless in acting and directing. If you expect something like an “Austin Powers” flick back from the original sixties, you will be disappointed. The production design and the costumes are uninspired and look as if they’d belong to a cheap british early-seventies TV series. Even those female robots have a boring look and could have been designed much, much spicier. The movie lacks highlights like the great Robert Morley’s hammy appearances, provided only in the first half of the movie. And this first half is a bore, anyway, especially due to the unfunny comic relief of Drummond’s sidekick. The second half runs better, with more action and more funny scenes in it. The best scenes belong to Daliah Lavi as the bad girl, while pretty Sydne Rome (as the good girl) is absolutely colorless. Poor production, poor fun -at least in this case. Watching this movie is not a complete waste of time, but it comes close to that. So you are recommended to watch “deadlier than the male” for a third time instead.