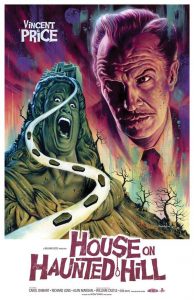 William Castle has made several wonderful horror films; some obviously better than others, but at the top of the list are “Thirteen Ghosts” and “House on Haunted Hill.” This movie might though have been all but forgotten if not one plucky guy recently remade this movie in to a much more gory movie. That movie is a remake in name only, but this one is obviously more superior because it has the incredibly creepy presence of Vincent Price and the nervous tick of Elisha Cook. The ghosts aren’t very scary, nor do we see anything really supernatural, but the atmosphere and uneasiness of this film makes for an incredible who done it story as you wonder who will get it. The set is intoxicating inasmuch as you never really see all of it, nor is it really explained what such a dangerous pit is doing in such a precarious spot in the basement. Such a matter isn’t important. On the other side of the coin, the music and the special effects are rather hokey, but then when this was in the theaters, a lot of the teenagers would have been making out to have really bothered to pick this movie apart. It is only in recent years that movies have turned away from gore and back to movies with style and substance that we appreciate films like this.