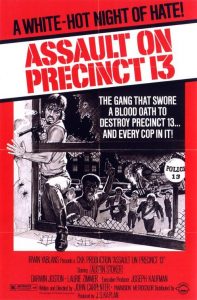 Assault on Precinct 13′ shows Carpenter in the fine creative form of his earlier days, when he produced such thriller and horror gems like `Halloween’, `The Thing’ and this little movie. As usual he eschews a complex plot in favour of a great little central concept – in this case a group of civilians, prisoners and police trapped in a deserted police station under siege from a mysterious gang who want to get at one man inside.

The acting in these movies is generally bland, but Carpenter at least breathes some dimension into his characters. The lead role goes to Lt. Ethan Bishop (Austin Stoker), the cop in charge of minding the building for the night. Naturally he’s honourable but there’s also a good sense of pragmatism to his character. Similarly the prisoner Napoleon (Darwin Joston) isn’t just a criminal – there’s something quite human to him. The same goes for the civilians caught up – despite their disparities the characters become a relatively cohesive unit that’s quite believable, enjoyable without veering into grating sentimentality ever. Naturally a lot of them are cannon fodder but the loss of individuals in such movies is one of the anticipations you expect in the genre.

Carpenter did a great service by making the protagonists of the piece silent. They never utter a word. They have nothing in common, hailing from all races. We have no motivation for their actions and thankfully we’re spared weak, and frankly pointless, excuses. Instead their blank faced determinism, and the manner in which they mete out death, lends them a horrific cold bloodedness that is far more memorable than typical thriller character building. There’s not so much a sense of palpable evil but a much more terrifying sense of complete inhumanity. Carpenter also uses his great skills with claustrophobia – even the outdoor scenes are deserted, lonely, isolated. The actual station under siege is well designed – we’re made aware of the layout quickly, before the action starts, so that the action sequences make sense without confusing us on issues of location. The darkness of the proceedings – pale lighting and so forth – add to the edgy mood of the characters. And Carpenter once again has a nice musical score accompanying his movie – it may sound dated, but it suits the ambience and atmosphere to a tee.

`Assault on Precinct 13′ is hardly clever. It’s not claiming to be. It’s a low budget work with a central `siege’ idea. It works because of the claustrophobic element, the feeling of desperation in the characters, some neat villains and fairly well fleshed characters. It may not be the pinnacle of its type, but it sure is enjoyable while it lasts.