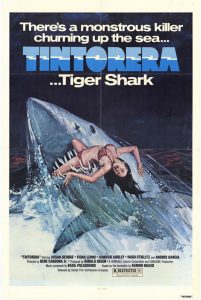 This is the great film “Jaws” might have been but wasn’t, Scenes with sharks are real. There are no mechanical stand-ins for the sharks. The characters change throughout the first half of this work but soon enough the central characters, more or less, appear. One reason for the change in character is that a Tiger Shark kills the Fiona Lewis character Patricia.

Then the angst seems to return for Steve but he meets two young women Priscilla Barnes as the girl from bar one and Pamela Gardner as the girl from bar two, but they join some other people for a party where those at the party engage in night swimming in an area plagued by a killer tiger shark. At that moment in the film, I somehow lost the plot and the film soon ended anyway.

This film includes the sex that Spielberg cut from his film. For its time, this was a good effort at portraying homosexual relationships. The photography is terrific and the acting is subdued and even subtle.