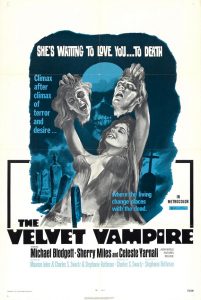 At first, this looks to be another of the “erotic vampire” movies that were so popular in the 1970’s, especially in Europe. But this American movie is actually quite different from Hammer’s “Carnstein trilogy”, the Rollins and Franco vampire films, and other European cult classics like “Vampyres” and “Daughters of Darkness”. It doesn’t really have the lesbian vampire angle that was often the bane of many of the European films. It’s more of a love triangle with a free-spirited hippie couple (Michael Blodgett and Sherry Miles) finding their swinging lifestyle tested by a mysterious and very seductive woman (Celeste Yanell). There is one incredible polymorphously perverse scene where Yanell sucks snake venom out of the Miles’s leg, and there are several heterosexual scenes between Blodgett and each of the women (usually while the other is secretly watching), but the plot is never completely overwhelmed with softcore groping,lesbian or otherwise.

The movie also has a very unusual (and very American)setting. It takes place in the Mojave desert near an abandoned mine and an old graveyard (where there are hints of cannibalism and necrophilia). It is atrociously acted (with Miles being the worst offender), but surprisingly well photographed, really making the most of its non-traditional horror setting. The vampire herself is also quite non-traditional. She has a reflection, is not overly adverse to sunlight, and may not really even be a vampire but instead someone suffering from insanity or a rare blood disease a la “Martin” or “Mary, Mary, Bloody Mary”.