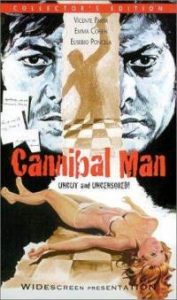 WEEK OF THE KILLER is definitely a more satisfying title for this film, it is at least an honest title as well. It’s a shame that those marketing this film to help it gain a profit opted for the title CANNIBAL MAN (as here in the U.S.), and its trailer trying to make it look more horrific than it really is, with chipper sounding narration in a “nice weather we’re having” tone!!

That is a shame because it’s useless to try and lure in horror/gore hounds for a film that’s basically a nice moody drama that will leave one with a saddened, downbeat mood rather than thrills. The “Cannibal Man” title is silly particularly because there really isn’t any cannibalism in the film. The closest thing to that is found to be a coincidence and even upsets the main character when he realizes what was in his soup.

Though I’d rather have seen it in the original language with subtitles, I’m still happy Anchor Bay has rescued it and released it on DVD for folks like me who enjoy obscure films.

The story is basically about a slaughterhouse worker who accidentally starts a downward spiral of killing and madness in his life, unable to cope with what he’s done and finding it’s just easier to off the people who get too close to his secret. The wide, open landscapes of yet to be developed land and the minimal score add amazing scope to the loneliness Marcos (Vicente Parra) feels, and mirrors the loneliness of his newfound friend that lives in the high-rise literally next door to his little house. Even the swimming scene had a quiet beauty to it. Considering the time and politics for 1971 in that area, there’s more to this story than just a man not able to cope with his murderous actions.

The neighbor’s sexuality is handled in a rather refreshingly basic manner, not being stereotypically gay nor lecherous. It’s also great how throughout the film, we wonder if he really knows more about what Marcos is doing than we can guess, with lines like “You better bury them,” is he talking about Marcos’ memories or the bodies starting to add up in Marcos’ bedroom? Their interactions are always fascinating, and were very much highpoints of the film. It was wonderful to see a scene like the swimming scene with these two men; somehow I get the feeling that if this film were to have been made today, the powers that be in Hollywood would have tried to work that scene with two women.

An increasing depressing tone sets in up through to the end, but some nice dialogues keep the story in check and moving despite the slower tone of the film. The violence works in context to the situations, rather than seeming gratuitous to satisfy those who feel they need to see that in order to enjoy a film. For me, I was far more disturbed by the first minute of the film, seeing the animal slaughtered. It was difficult getting through that. The sexual element is surprisingly minimal, not as much nudity as you’d think a film of this storyline would have, but since it’s not really an exploitive film, having less breasts to gawk at works in its favor. Like many films of that European source and time, having no end credits leaves the viewer in a more affected mood with the film’s rather abrupt ending.

LA SEMANA DEL ASESINO is great viewing for fans of drama, but horror seekers should stay clear. It’s good to see other people commenting about the film’s interesting qualities instead of reading comments that they felt ripped off that it wasn’t about cannibals or full of tense scary scenes. It’s pure drama, and I’m glad some people are managing to get around the unfortunate marketing ploys this film was given and see how worthwhile it really is! Indeed a nice discovery.