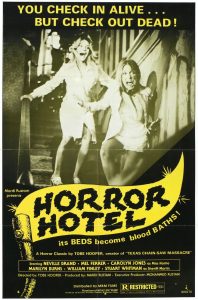 After listening to a lecture by Prof.Alan Driscoll, Christopher Lee, on the town of Whitewood Massachussetts back in 1692 where a local witch, Elizabeth Slwyn, was burned at the stake one of Prof. Driscoll’s students Nan Barlow, Venetia Stevenson, decided to do a term paper on the subject. Nan drives to Whitewood to get whatever information she could get on the subject from whats available in the towns records dating back to the 17th Century about witchcraft in general and the Slwyn case in particular.

Getting instructions from a reluctant local living in the area Nan drives into the town of Whitewood and checks into the Raven Inn where she meets the owner Mrs. Newlis, Patricia Jessel, and her mute helper Lottie, Ann Beach. Nan, unknowing to her at the time, was to meet a fate reserved only for someone like her, an innocent girl, that was needed for the Witches Holiday of February 1, Candlemass Eve the Satanic mocking of the Church.

Early Witchcraft and devil movie that predated “Rosemary’s Baby” and “The Exorcist” but despite it’s small budget is as good as either of those movies and the dozens of imitations that followed them. Eerie and spooky film about Witchcraft in New England that covers some 300 years from the Salem Witch Trials in 1692 to the beginning of the Disco Swinging era of the 1960’s.

The town of Whitewood is both in the dark and fog at all times in the movie with not a single ray of sunlight ever descending on it. This gives the town a really creepy look as well as unnerving everyone in the theater audience watching the film. It makes one feel that the movie was made in Northern Alaska during the time when it has six months of darkness instead of the state of Massachussetts.

Gripping as well as interesting movie with a great ending sequence where good overcomes evil despite the overwhelming odds against it.