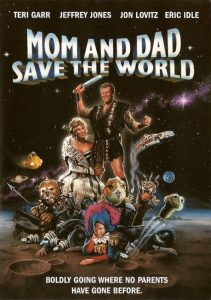 Tod Spengo (Jon Lovitz) has overthrown the government of his small, strange planet, renamed it “Spengo”, and is now intent on destroying the Earth so that he can lay claim to the most powerful planet in the universe. A monkey is thrown in the works when he looks through the scope of his death ray to aim it and spots a hausfrau-looking Marge Nelson (Terri Garr). He decides that he must have her as his Queen, so postpones the destruction of the Earth for a day, until he Marge can get to Spengo.

I wasn’t aware of this film until recently, and that’s a shame, because this is right up my alley. The name of the game here is absurdism and surrealism, with a hokey/campy comic bent. Think of a merger between Monty Python, Mel Brooks and Dr. Seuss, and you’ll be in the ballpark.

For me, the first sign that this film was definitely on the right track was how Tod absconds Marge–he basically uses a huge magnet, apparently with high-precision aiming capabilities, and pulls Marge along with her husband Dick (Jeffrey Jones) through space in their station wagon. Dick frets that they’re running low on gas and he hasn’t even checked the oil, while Marge snaps holiday photos.

I loved the set, costume and creature designs. The Spengo sets tended to be very Seussian, and the costumes and creatures aimed for and achieved maximum ridiculousness. The fact that Spengoans are mostly idiots, by their own accounting, made available some hilarious plot devices, and provided believability within the context of the film. Eric Idle even has a cameo as the former King of Spengo. He delivers some very funny dialogue that I’d guess was primarily improvised, as it bore a strong resemblance to typical Python dialogue. The rest of the cast was excellent, too. It probably helps that I’m a fan of all three of the principles–Jones, Garr and Lovitz.

On another level, Mom and Dad Save the World is a very enjoyable sci-fi/fantasy/adventure film–director Greg Beeman and writers Chris Matheson and Ed Solomon almost subtly spoof the conventions of that genre, and there is also a theme about breaking out of shells to live more authentically.