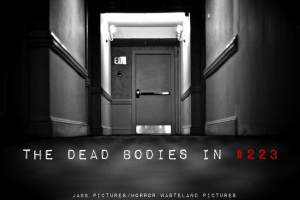 Review by Abby Braunsdorf
A businessman cheats on his wife with his favorite prostitute. The hooker ODs on drugs and dies in his hotel room. So he calls the cops and the movie’s over, right? Of course not. In the latest film from Indy locals JABB Pictures (Jason Hoover) and Horror Wasteland (Bobby Easley), the cover-up is far worse than the crime.

Bill (well-played by Nate Coulombe) strays from his wife (the ubiquitous and always wonderful Ellie Church) and into a world of hurt, mostly in the form of a pimp with the imposing surname of Slaymaker (Dustin Wade Hoke). Turns out it’s a lot harder to get rid of a body than it looks on TV, especially when both your and their absence are aggravating people.

Initially, Bill tries to find a way out that won’t lose him his wife or his job, but as things get more complicated, his only priority is survival. Unable to come up with enough money to appease Slaymaker, all the pimp wants is to rub him out.

Although the editing could be a little tighter, the movie does a good job of putting us in Bill’s shoes and maintaining tension as things escalate. The casting of Slaymaker (and his car!) is spot on and the production is solid all around.

There is one problem I had, though. Maybe I missed something, but there’s a scene in the middle of the movie where Slaymaker is taking care of unrelated gangster business that doesn’t seem to belong. Similarly, there’s probably a scene along the same lines missing that would make the ending more satisfying. My guess is that plans (or Ellie’s availability) changed partway through production and the final version is muddled as a result.

But, besides that, this is a good portrait of an ordinary man in a predicament desperately looking for a way out. It’s not revelatory, but it’s a solid independent film with strong performances.