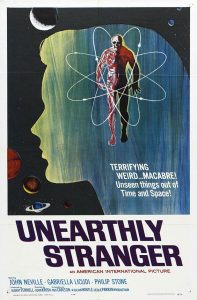 This film’s basic premise isn’t dissimilar to that for I MARRIED A MONSTER FROM OUTER SPACE (1958), so that I deliberately watched them on consecutive days. However, while I liked the latter well enough, UNEARTHLY STRANGER proved something else entirely; it also stands as a testament to how different American and British film-makers treat the same theme – the former usually take a common man’s view of things, while the former tend to adopt an intellectual (and, therefore, more intriguing) approach.

Anyway, I knew beforehand of the film’s reputation as a minor classic of sci-fi cinema – which is why I decided to acquire it in the first place (though I almost had to make do without it, as it took quite a while to get the DivX copy to work properly!), but I was genuinely surprised by the result. This, in fact, has to be the most satisfying ‘B’ movie I’ve watched in a long time! Above all, it’s marked by a literate and intelligent script, imaginative monochrome photography (by NIGHT OF THE EAGLE [1962]’s Reg Wyer) and a splendid second-tier cast. John Neville – perhaps best-known for his starring role much later in Terry Gilliam’s THE ADVENTURES OF BARON MUNCHAUSEN (1989) – is an atypical hero, character actor Philip Stone surely has his most significant role – otherwise some might remember him as Malcolm McDowell’s meek father in Stanley Kubrick’s A CLOCKWORK ORANGE (1971), Gabriella Licudi – whose mix of exotic looks and sweet-natured countenance suggest the inherent ambiguity of her character and, playing other key figures, Patrick Newell and Jean Marsh.

The story is told in flashback and bookended by the violent deaths of two officials involved in a space program – which immediately draws one into the proceedings; in retrospect, though I was aware of the identity of the titular figure, it was interesting that the director opted to reveal it in the character’s very first appearance! The unexpected denouement, too, was a brilliant touch – taking care to provide one more devastating and downbeat twist to a tale which had already reached a satisfactory climax (the idea that aliens are already among us and in large numbers was rarely this chillingly presented, though it could well be a case of collective hysteria on the part of an understandably distraught Neville and Stone!). The earlier scene, then, in which Licudi herself displays a similar sensation of confusion and loneliness (through her own weird effect upon a group of schoolchildren) probably constitutes one of the more sublimely mysterious passages in all of sci-fi cinema! Even if the production’s low-budget is betrayed by the fact that the aliens’ true selves are never shown (being restricted merely to subtle indicators of flaws in their human ‘form’, which then simply disintegrates in death!), it’s not much of a liability – since such appearances are usually disappointing anyway. That said, the ruse of having a swishing sound (“like telephone wires in the wind”) anticipate their presence while on the prowl is a clever and more-than-adequate substitute.

In the end, considering the fuzzy video quality and the constantly distorted soundtrack of the print I watched, UNEARTHLY STRANGER’s unavailability on an official DVD (though, being an independent feature, I concede that its rights may not be so clear-cut after all this time) is not merely baffling but criminal – given that fans of the genre are being deprived from enjoying a veritable gem!