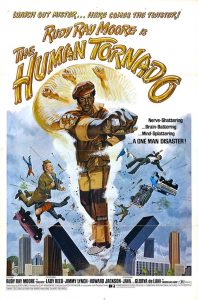 The Human Tornado is a campy 70’s Blaxploitation movie starring nightclub comedian Rudy Ray Moore in perhaps his most endearing role to date. The movie tells the tale of Dolemite, a bad ass pimpin’ hustler who gets on the wrong side of a white, racist sheriff by sleeping with his wife. Dolemite barely escapes, and journeys to sunny California to visit an old friend, a nightclub owner (and Madam to Dolemite’s ‘ladies’) named Queen Bee. However, it seems that a rival nightclub owner with Mob connections is trying to muscle in on her racket, so Dolemite takes matters into his own hands. Rudy Ray Moore showcases many diverse talents in this landmark film, including strong dramatic skills, a mastery of Kung Fu, an impressive singing voice (he provides two of the songs on the soundtrack), a touching, compassionate side with the ladies, and an overall compelling charisma and keen sense of comic timing. This film has it all, people: A deep plot, blistering action, laugh-a-minute comedy, beautiful women in distress, a slam-bang ending…what more could you ask from a movie? Run, don’t walk, to your local video store and rent The Human Tornado today. And be sure to share it with your family.