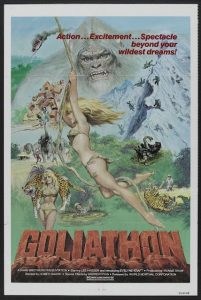 “The Mighty Peking Man” has it all. This was always an elusive flick for me, until I finally found a poor VHS copy of it under the title of “Goliathon.” Quentin Tarantino had this released on DVD (my very first DVD ever purchased) and there it was, finally in all it’s beautiful glory.

This is exactly what these films are supposed to be – nothing but non-stop fun, and lunacy. The story is similar to “King Kong” but this flick stands on its own. It’s a very bombastic movie – the music is loud and dramatic, and there are a LOT of explosions and fires, all done to the max in deep sound, a decent sound system will do this one justice.

The inconsistencies are hilarious of course – everything seems to change size, from the monster to rocks to the buildings (depending on how big the monster is in any given scene). The gorgeous jungle girl wears makeup and is nice eye candy. And even though Peking Man is in the area, making a LOT of noise destroying buildings, stomping on cars, wrecking highways and causing explosions, people almost right next to him just go about their business casually, until they actually SEE the creature (maybe they need their ears checked).

One big plus is that the model/miniature work is nothing short of spectacular – there are a lot of very impressive miniature sets and models built. One array of buildings and elevated highways is especially fantastic, as is the destruction.

The film moves fast and is never dull. Even though Godzilla movies were no longer being made at this point, some interesting giant monster movies came around this time frame, a few good (like “Yeti: Giant of the 20th Century”) and some bad (like “A.P.E.” and “Queen Kong”) but this is probably the best. “Peking Man” is an absolute must-see.