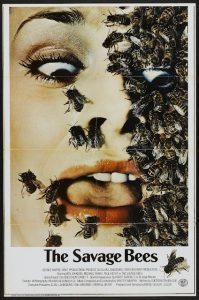 One of the first “Killer Bee” movies to come out in the late 1970’s “The Savage Bees” starts out with this Brazilian banana boat, the Cornila Rios, limping into New Orleans Harbor with everyone on deck being either missing or dead.

later in the movie a local Sheriff Donald McKew, Ben Johnson,finds his dog Zeth dead and despite it being Fat Tuesday and the Mardi Gras parade he takes Zeth’s body to the City Coroner’s Office to find out what killed him. Assistant Coroner Dr. Jeff DuRand, Michael Parks, sees something in Seth’s stomach that truly disturbs him and calls his girlfriend and entomologist Jenny Devereaut, Gretchen Corbett, to check it out. It turns out that his as well as the city of New Orleans, worst fears are borne out. Zeth was killed by a swarm of deadly killer African Bees.

With a number the crew of the Corlina Rios bodies recovered from New Orleans Harbor it becomes more and more evident that the banana boat has a colony of African Bees hidden in it’s hull.

Trying to keep the story of the invading African Bees under wraps Sheriff McKew has a number of his men fan out in the countryside to find the African Bees hive and at the same time both Jeff and Jenny get in touch with bee expert Dr. Rufus Carter, Paul Hecth. Dr. Rufus warns them not to disperse the deadly bees, with fire and insecticide, because it would only have them invade friendly European or Italian Bees hives and take them over and start dozens, if not hundreds, of African Bee colonies. Thosesbees would attack and kill thousands of people and livestock all around the state.

Dr. Carter gets in touch with the biggest authority on the killer African Bees Brazilian professor & Dr. Jorge Meuller, Horst Bucholtz,and has him come to the city’s rescue but it turns out that the Killer Bees were a lot tougher, and more dangerous, then even Dr. Meuller thought that they were.

Even though a bit lacking in production values “The Savage Bees” is a lot better then the far more expensive and star studded Killer Bee deserter movie “The Swarm” that turned out to be a real disaster and bombed out in the movie houses a few years later. Dr.Meuller is killed when trying to catch the Queen African Bee when a couple of drunken Mardi Gras party goers accidental cut open, with a plastic sword, his anti-bee protective suit thus being, together with the two party drunks, stung to death.

Jenny ends up being stuck in her red Volkswagon,the color red attracts the killer bees. Jeff in a last act of desperation has her drive the car with him in a police car pushing her Volkswagon, the last mile, through the now empty streets of New Orleans into the Superdome.

The temperature inside the enclosed sport facility is lowered to 45 degrees immobilizing the killer bees and having them collected and brought into the custody of Dr. Rufus Carter’s lab for further study. It’s just too bad that one of the killer bees survived capture and escaped to start the entire horror of attacking African Bees all over again in about a dozens or so movies that followed “The Savage Bees”.