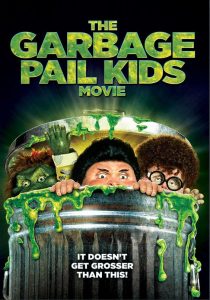 A movie like this only comes around once in a lifetime, and I don’t necessarily mean that in a strictly negative tone, or for that matter a positive one. There’s only one way to describe a movie like The Garbage Pail Kids movie, and that way is with “bizarre” or one of its many synonyms.

It’s absolutely astonishing that a movie studio would fund, produce, and widely distribute this picture to theatres. The script is, in a word, abysmal. Dozens of obvious questions are raised at the outset; Why does Dodger(our hero) virtually live at Mancini’s Antique Shop? How has said shop stayed in business having not sold a single item in months? Why does a twentysomething looking goon continue spend his life picking on a 14 year old wimp? All of these questions are quickly relegated to the back-burner when one sets eyes on the Garbage Pail Kids for the first time. Aside from most of the kids being hideous(Nat Nerd and Valerie Vomit in particular), the puppetry is atrocious. Dialogue is rarely lip synced, and when it is the mouth movements are incredibly stiff. Amazingly, poor quality of the costumes is paled only by the stupidity of the film’s plot,

revolving around Dodger’s efforts to woo Tangerine away from “Juice”, the same goon who keeps chasing Dodger around and stealing his lunch money. Fortunately for Dodger, the titular Garbage Pail Kids are apparently endowed by their Creator with unsurpassed fashion design skills, the very same skills Tangerine is trying to use to hit the big time and move to New York! The kids put their abilities to work and sew Dodger a hideous jacket to impress Tangerine, and before you know it we’ve got a love triangle of such depth not seen since…ever. Or not.

Laughably bad performances abound, although even McKenzie Astin as Dodger delivers an Oscar-worthy performance in contrast to Ron MacLachlan as Juice, who delivers unequivocally the worst performance I have ever seen in a non-pornographic motion picture.

All of this is overshadowed by the scenes of the Garbage Pail Kids general tomfoolery, which includes such wacky hijinks as stealing a Pepsi truck, breaking into a sweat shop while singing “We Can Do Anything by Working With Each Other!”, roasting hot dogs over an open fire, causing mayhem in a movie theatre, and most incredibly, participating in a biker bar brawl, kicked off by driving an ATV straight through the window. I am not being hyperbolic in the least when I describe each and every one of these scenes as a unique spectacle in the history of cinema. I cannot imagine there will ever be a film made with a more innately “weird” quality than this one. If you have any curiosity whatsoever about this film, I recommend you see it. There truly isn’t and most likely never will be another experience in cinema quite like watching The Garbage Pail Kids Movie.