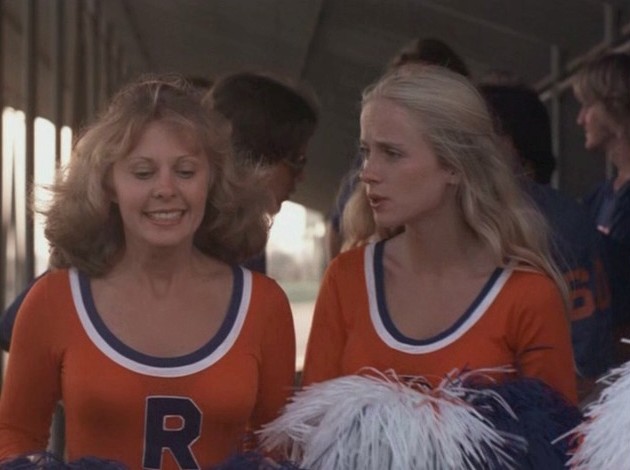 Bold, brash, and full of other peoples sticky goo, the characters that inhabit the lackadaisical world of The Pom Pom Girls (a.k.a. Lâche-moi les baskets and Las chicas del Pom Pom) are social misfits of the highest order. Whether stealing a fire truck in broad daylight or brawling openly during the singing of “America the Beautiful,” these young rapscallions have no regard for the rules and regulations put in place to keep them in a constant state of passivity. Urinating out the window in the middle of quadratic equations, casually pulling knives on one another, and smearing each other with cafeteria food in a blase manner, it would take me forever to list the amount of mischievous acts Johnie, Sally, Jesse, Laurie, Roxanne, Judy, Sue Ann, and, to some agree, Duane, commit in this superb example of how to properly portray teenagers in their natural habitat. Vandalism and acts of inconsequential criminality were the primary activities of my youth, and this film by Joseph Ruben (The Sister-in-Law and The Stepfather) captures that foolhardy spirit perfectly. As with real life, the plot of this randy endeavour meanders aimlessly in no particular direction, with no particular point, it just exists. Weaving its way through the first few weeks at a California high school, the story is about nothing. On the surface, anyway. However, if you were to put forth the effort and peel back the many layers, you’ll discover a rich cornucopia of shapes and colours just waiting to be looked at by eyes with a taste for the avant-garde.

Unlike the felonious nimbus of my teenage existence, the characters that populate this particular time period possess souped-up mobile sex wagons (also known in some circles as “vans”).

These “vans” helped the young people of the day procure partners for sexual congress and enabled them to fornicate in a dry and moderately sanitary environment without risking embarrassing afflictions such as “pebble butt” or the dreaded “grass stain crotch.”

The fact that I failed to see a single pom pom in The Pom Pom Girls until at least the one hour mark did not bother me one bit. The easy-going nature of the film ’til that point was so dreamy and relaxed, that I didn’t seem to care that I hadn’t seen a pom pom. Credit has to go to the film’s semi-attractive cast. I mean, how they were able to make me forget about pom poms was a mini-miracle. The film’s anti-education, anti-athletic, anti-everything stance also did a fine job at keeping my thoughts elsewhere.

Lead by the terrific Robert Carradine (Revenge of the Nerds), who plays the cocksure Johnnie, the film’s ensemble is deeply talented across the board: Bill Adler (Van Nuys Blvd.) was great as usual as Duane, Johnnie’s hotheaded rival; Lisa Reeves (The San Pedro Bums) was supremely foxy as Sally (Johnnie’s forthright love interest); Michael Mullins displayed an appealing form of masculinity as Jesse, a football-playing van owner, and a smooth and creamy Jennifer Ashley (Phantom of the Paradise) frolicked like someone who frolicked professionally.

Others who caught my eye were the exquisitely structured Susan Player (Malibu Beach) as a flirty pom-pom shaker, Diane Lee Hart (Revenge of the Cheerleaders) as a cheerleader with a really nice bottom (while the majority of “the pom pom girls” had boney behinds, Diane’s had a lot of oomph to it), and Cheryl “Rainbeaux” Smith (Lemora: A Child’s Tale of the Supernatural) as a skinny blonde chick, who, unfortunately, was more of a spectator than a participant.

The lovely Sondra Lowell rocks as the adorably bespectacled Ms. Pritchitt, Rosedale High’s embattled geometry teacher trying to impart her knowledge of quadratic equations while wearing a pleated skirt. Proving that teaching teenagers is extremely hard work, Sondra (credited here as Sandra) plays the nervous educator with a sympathetic zeal. Maybe it’s because I’m not twelve anymore, but I wanted to slap the brats who dared to disrupt Ms. Pritchitt’s class.

No doubt inspired by her therapist’s advice to be more assertive with her students, Ms. Pritchitt sexily slinks out from behind her no-nonsense desk and confronts the class in a more direct manner.

Everyone I mentioned, with the exception of Sondra’s Ms. Pritchitt (damn teachers and their obsession with clothing), appears naked in some form or another during an impromptu changing sequence (the guys even show a little skin in the shower, some show upper-crack, some show full-crack). The shameless and gratuitous nature of this sudden barrage of nudity helped alleviate the non-nakedness of the film’s first third. Which up until then had only been supplied by the spunky Susan Player in a couple of van-centric encounters.

Nevertheless, this bit of exposed naughty flesh was strictly for the benefit of the perverts in the audience. While, the rest of us “normal people” enjoyed the film on a more cerebral level. In other words, appreciating it for its intelligence and not just its lewdness. A brilliant film that is almost ruined by unnecessary nudity, The Pom Pom Girls is intellectual cinema at its finest