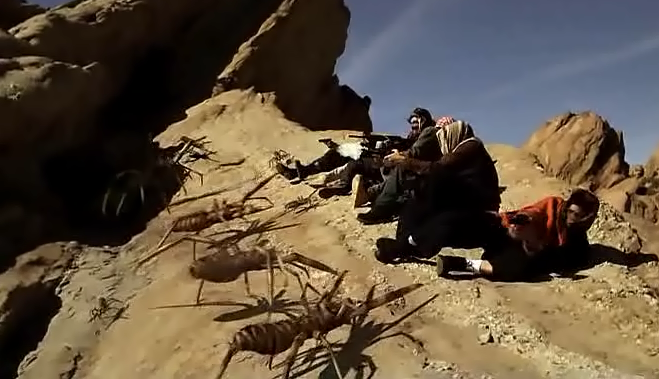 Camel Spiders opens with a shootout between American soldiers and a group of bad guys somewhere in the Middle East. Of course, for anyone who is well familiar with B-movies can immediately tell you, that’s not the Middle East: that’s Vazquez Rocks — a Southern California location popular with filmmakers, particularly the ones who film on the cheap. And, when it comes to making cheap movies, the legendary producer/director Roger Corman is an expert in the field. But to define Camel Spiders (which Corman produced) as a “cheap” production would only cheat the very definition of the word.

Immediately after the film opens, the bad guys are killed by a marauding flotilla of six-legged CGI spiders, who carry them all away in pieces. Unfortunately for all (especially the viewer), a couple of these Camel Spiders make their way back to the States in the body of a dead soldier. We then transport to a previously-unknown version of Arizona wherein everyone speaks with a southern drawl and has a California license plate on their vehicle. It is there that our “hero” of the movie, Brian Krause (as an Army captain) meets up with local hick sheriff C. Thomas Howell and about a dozen or so terrified citizens and travelers — all of whom are besieged by the cheaply-animated titular critters.

Most of the performers here are — as you can expect — not what you would call professionals (and that’s saying it nicely); the movie is literally littered with bad actors, many of whom are there to be killed by bad special defects. People show up solely to be eaten, squished, and torn apart by the ridiculous-looking arachnids — something that really has you wondering how many of them pitched in a few bucks just to show up onscreen. And if that’s the case, I can’t even begin to imagine what this film’s final budget was, because it’s one of the cheapest movies I have seen in a long time (well, since 2-Headed Shark Attack, that is).Let’s put it this way: Camel Spiders is awful. It’s an absolutely, completely, and utterly awful mess courtesy veteran B-movie auteur (and Corman protégé), Jim Wynorski. And you’d have to be nuts to think that it would be something other than just that. Naturally, the fact that it’s so bad is the film’s greatest appeal. It’s also the movie’s only charm — as there is no nudity to be found here (which is almost unusual for a Jim Wynorski flick). Anchor Bay releases the hunk of glass cut to resemble a gem to DVD and Blu-ray (!) with no special features other than previews for a few other movies — which probably meant they didn’t want to waste anymore time on it than its filmmakers did.