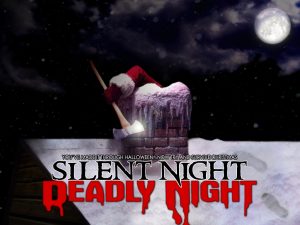 Silent Night, Deadly Night tells the story of a boy whose parents were killed in front of him as a child, and it was by a man dressed as Santa Claus. Not only that, the man shot the kid’s dad in the head and tried to rape his mother before slitting her throat while the boy watched. He hid so he escaped, but the memory remained, even throughout Catholic school where the Mother Superior was strict and violent, saying punishment is good and all naughty children should be punished. Naturally, this messed with the kid’s head, so one day when he’s finally all grown up, Christmas time comes along at his job and someone has to dress up as Santa Claus. Well, who better than the kid whose parents were killed by Santa to play dress up! He then embraces being Santa Claus, a judgmental fat man who kills naughty people, and that’s when the bodies start piling up.

It’s a truly dark story. The movie would have been much better had they focused more on the psychological aspect as opposed to it just boiling down to “Santa is a killer. Now I’m Santa. Now I must kill!” It felt like the whole setup was wasted for an anticlimactic, soulless killing spree. Sure, there are some good kills, and there are plenty of boobs in typical ’80s B-horror affair, but it failed to make an impact on anything more than a surface level. It’s an enjoyable movie, it’s simply a matter of greater potential not being realized.

Now this is a horror movie, not an unintentional comedy like its infamous sequel, and it’s admittedly effective as one. It’s refreshing when a horror movie has an actual narrative you can follow. Worth a watch if you’re a horror buff or just want to watch Santa kill topless women for an hour and a half.

Was the above re