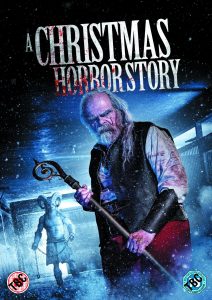 Directors Grant Harvey, Steve Hoban and Brett Sullivan all lend their talents in an attempt to turn the happiest day of the year into a horrifying movie experience in A Christmas Horror Story.

Best described as an anthology, A Christmas story interweaves multiple stories with Christmas being the anchor theme. The stories are diverse and in no way repeating. Santa takes on a horde of zombie elves. A family goes Christmas tree hunting where their son gets possessed by a demon. A group of teenagers return to the scene of a grizzly crime to film a documentary where the evil still lurks. And a family is terrorized by Krampus, the anti-Santa Claus.

William Shatner plays a radio DJ host that helps intertwine the stories and provides some spots of levity along the snowy roads to where the film journeys. The stories themselves do not play out in their entirety before moving to the next segment a la say Tales of Halloween or the ABC’s of Death. Instead, the filmmakers jump between the stories which allow them to keep audiences on their toes and ensure that the lesser terrorizing / more dramatic scenes are broken up with the moments horror fans relish.

What makes A Christmas Horror Story so different from its peers is that there is not a dull story in the mix. Sure, not all stories share the same enthusiasm, gore or humor, but there wasn’t any particular segment I wished would just mercifully end so that we could get to a more interesting one. That is great praise to say the least. I could not say that about Tales of Halloween and that makes A Christmas Horror Story more in line with say Trick ‘R Treat than Creepshow.

Yes, Yes, Yes, we still had our favorite. That would be Santa’s story on combating zombie infected elves and his eventual showdown with Krampus. The effects, make-up and overall execution of this segment are worth the price of admission alone. Santa comes across as an 80’s action hero. His eyes didn’t twinkle. His dimples weren’t merry. His cheeks weren’t like roses. My god was he scary! The Santa/Krampus showdown might be the highlight of the film but one can’t ignore the other segments that lead to the climax. Each provide a fun sleigh ride of horror and all three could have been their own movie if the stories were expanded.

A Christmas Horror Story played at the Toronto After Dark Film Festival on Saturday night and the audience clearly got in on the fun laughing at the right moments and offering applause for some of the more gruesome scenes.

There are not a plethora of good Christmas horror films out there. In fact, after Black Christmas you would be hard pressed to name another outside of a Silent Night, Deadly Night. But A Christmas Horror Story brings enough presents in its Santa sack to make this a rather fun film that might just become a ‘go-to’ film for many horror fans every December.