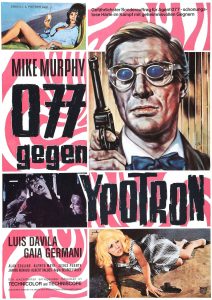 Ypotron boasts a colorful sci-fi pop art pre-credit sequence. A sliding door opens to reveal our hero, dressed in a tuxedo, who puts on a pair of night vision glasses. He enters the room and while trying to figure out a strange design on the wall is shot in the back with a machine gun. It turns out he was testing his bullet-proof vest but it was a fun introduction to world of Lemmy Logan (Luis Davila).

We are treated to a terrific score by Nico Fidenco throughout the film and the swinging theme song is performed by The Sorrows. This film has enough bad guys for three movies and the confusing plot doesn’t help any. Things to look forward to are scenes with wind tunnel peril (it had to happen), a strange stripper act, and dialog that loses something in the translation. Note: the bloodthirsty of you will enjoy the bullfight scenes where you witness the actual killing of a bull.

Our heroes get to use all manner of fancy gadgets in their pursuit of evil. Lighter communicators get a workout and there’s an instant oil slick capsule to derail those bad guys chasing you. They use a briefcase movie camera which not only develops the film automatically but will also project it onto a tiny screen, a receiver in a Norelco shaver, a nifty gadget that makes phones ring, and a radar tracking device in a Bible!