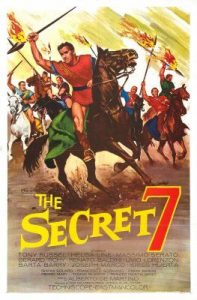 This is another of those films which originally received a wide international release, but today remains mysteriously absent in any English language print or even any European language DVD release, so here I am reviewing it from a ropey DVD-R in Italian with Greek subtitles, with only a Spanish press release to guide me (which fortunately I do understand).

The setting is 4th century A.D. Sidon (in modern day Lebanon), not that this has any real relevance to the plot.

Axel (Serato), a rebel, is captured and condemned to death by tyrannical King Rabirio (Tichy). Meanwhile Axel’s brother Leslio (Russel) has bought the freedom of five rebel slaves (including Baldini and Lorenzon), and enlists their help in rescuing him.

Returning to their village Leslio and Axel discover that their mother (Baron) has been killed by Rabirio’s troops, so the seven plan their revenge, kidnapping an architect. Leslio then poses as the architect gaining entrance to the palace, and discovers his old flame Lidia (Line) is now Rabirio’s lover, but it’s not long before she falls for his charms again.

The seven capture a gold shipment destined for Rabirio, but then he discovers Leslio’s true identity, imprisoning him and threatening to kill Lidia if he doesn’t hand over his accomplices.

The remaining six naturally come to his aid and peace is restored when Rabirio is killed in a pretty impressive stampede.

This is an enjoyable enough romp, but it’s definitely peplum-lite with a by-numbers plot, the reliable genre cast coasting on autopilot, Line wasted with little to do, and Tichy a bit of a damp squib in the villain department.