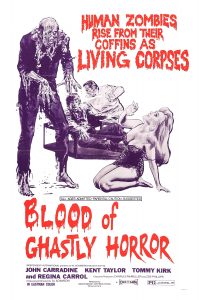 In 1965 Al Adamson produced and directed a very low budget quickie called “Psycho A Go-Go”, in which an ex-soldier is turned into a zombie-slave-killer by criminals who implant a device in his brain. The film was a big flop.

Four years later Adamson tried to jazz it up by adding new scenes and giving it a new title: “Fiend with the Electronic Brain”. This new version was also a big flop.

In 1971 Adamson decided the film needed more new scenes, and this time he got Kent Taylor (“The Day Mars Invaded Earth”) and John Carradine to help out. Even better, Adamson persuaded his sexy wife, Regina Carrol, to play Carradine’s daughter. Best of all, he got Tommy Kirk (“Mars Needs Women”, “Village of the Giants”) to play a police detective who investigates the murders. To celebrate the film’s big upgrade, he retitled it again: “The Man with the Synthetic Brain”. Even with these well-known stars and nifty new title, the film was still a big flop.

So Adamson waited awhile, gave the film another new title, “Blood of Ghastly Horror”, and re-re-re-released it. Naturally the film was a big flop again because it was the same terrible movie that had flopped the last time.

Is that the end of Adamson’s Indestructible Movie? Definitely not — in fact, this isn’t even the entire middle of this remarkable film’s history. At various times the movie has also been released under the title’s “The Man with the Atomic Brain” and (get this) “The Love Maniac”.

Maybe the next reincarnation of this unkillable film will be disguised by a really tricky title — like “War and Peace” or “The Eleven O’clock News”. Good heavens, what if we just walked into some theater and found ourselves trapped into watching . . . “X: The Unknown Movie”!