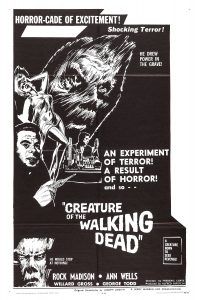 Had to do some research on this one. This film was originally a Mexican film directed by Frederic Corte and titled ‘La Marca Del Muerto’ American director Jerry Warren bought the rights, threw in a few new scenes, took out a lot of the dialogue and dubbed the rest in English. Mostly instead of dialogue he gave it narration explaining what you are viewing. You can really tell the difference from the original scenes and the ones that were added by Warren. The original footage seemed to have great atmosphere had a neat Gothic look about it. The added American scenes are terrible. The constant narration is aggravating and the scenes added by Warren are almost laughable. I have to say almost laughable because it’s really a shame that he probably butchered the original ‘La Marca Del Muerto’. It might have been nice to see it before the hack job and with legitimate dubbing. Creature of the Walking Dead is a pretty bad movie.