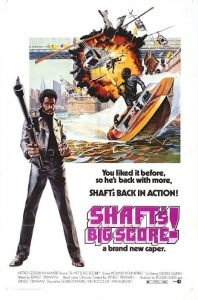 Shaft really was the African-American answer to the popular James Bond franchise. This movie shows this perhaps more than any of the other Shaft movies. Violence, girls, sex, chases, “Shaft’s Big Score!” has it all!

By no means any of the Shaft movies are among the greatest of all time. Nevertheless they are extremely memorable thanks to its main character, played by Richard Roundtree. He’s hip, digs his women and isn’t afraid to hold back when it comes to action. He’s a classic and important iconic African-American character from the ’70’s.

The movie its story and plot lines are a bit messy (in that way this movie also resembles James Bond movies), which also makes the movie unclear and not always totally interesting to follow. The movie also really lacks a good main ruthless villain. The villain in this movie is perhaps introduced a bit too late to really leave his mark on the movie. In that way “Shaft’s Big Score!” is a really lacking movie, when it comes down to its story, storytelling and characters.

Thankfully the movie isn’t lacking in action and great dialog. Some of the dialog is just brilliant and suits the atmosphere of the movie- and its time period extremely well. Also of course the music adds to this atmosphere. But surprisingly good is also the action in the movie. The movie doesn’t really feature that much action but the lack of it is made up during the great finale, that features a good old fashioned typical ’70’s car chase, boat chase and helicopter chase in one, James Bond style. It’s really true that the ending makes up a lot. It makes you forget some of the weaker points of the movie, although in the end “Shaft’s Big Score!” is still nothing more than an average action-flick with one great, cool main character.

A good movie featuring the classic character Shaft and some really great action.