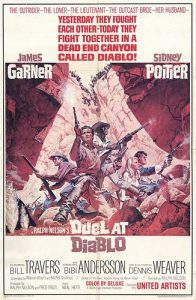 “Duel at Diablo” filmed in 1966, has a cast of both American and international players and touches of violence coupled with prejudices. It makes for an interesting mix and provides the viewer with a tense depiction of the usual struggles of the Apaches against the US Cavalry. James Garner plays Jess Remsberg, an Indian scout now out looking for the man or men that raped and killed his Indian wife. Sidney Poitier adds an excellent portrayal of a former Army sergeant who has quit the job of soldering in exchange for breaking horses, and selling them to the Army. Bill Travers and Bibi Anderson provide the international flavor in the cast, and Dennis Weaver gives the viewer a chance both to detest him and feel some sorrow for his warped prejudices toward those he considers inferior or below his status.

The group of troopers heads out across the desert to another fort in the area, but are headed off by a group of Apaches that have jumped their reservation. Garner does find out the identity of the man who was responsible for the rape/killing of his Indian wife, but in order to extract his revenge, he must first make it to the canyon of Diablo and rescue the beseiged group of Army troopers from being killed by the Apaches.