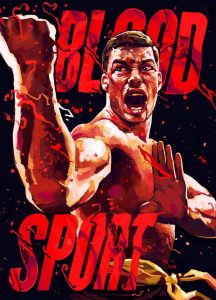 In this early starring vehicle, Jean-Claude Van Damme plays the real-life Frank W. Dux (as in, “Put up your Dux!”). Frank’s an American soldier who goes A.W.O.L. in order to travel to Hong Kong and participate in the Kumite, a brutal, full contact martial arts tournament. It’s so brutal, in fact, that some who enter the contest don’t make it out alive. While Frank is pursued by government agents (played by Norman Burton and Forest Whitaker) who mean to take him back to the U.S., he makes friends with amiable giant Jackson (Donald Gibb) and attempts to romance reporter Janice Kent (Leah Ayres).

There isn’t much in terms of story throughout this relatively brief movie (93 minutes all told), but devotees of the action genre will get what they aim to see. “Bloodsport” is deftly edited, adequately paced, effectively gory at times, and features enough intense fighting to make it suitable entertainment. Van Damme may not have been much of an actor at this point, but he was already displaying that easygoing charm that has served him well. Gibb, best known as Ogre in “Revenge of the Nerds”, delivers a lively performance as his new buddy. Ms. Ayres (“The Burning”) does a decent job as the requisite romantic interest and certainly is very easy on the eyes. Burton and Whitaker are good as the government guys just trying to do their jobs; it’s fun to see them attend the final matches and actually start enjoying the spectacle. Genre legend Bolo Yeung is a perfect villain as Chong Li, the reigning champion of the Kumite who’s developed an enormous ego. Roy Chiao (Bruce Lee’s “Game of Death”) as Frank’s mentor Tanaka and Philip Chan (“Double Impact”) as police captain Chen are excellent in support. By the time of the big confrontation / fight at the end, sufficient rooting interest has been generated.