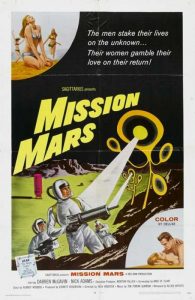 The year: 1968. The movie “2001: A Space Odyssey” sets new technological and intellectual standards in the SF genre. Likewise 1968: The movie “Mission Mars” sets new standards of daftness and technological incompetence in the SF genre. The unsuitable, excruciating title song “No More Tears”, sung by Sturg Pardalis (sic!) and played by “The Forum Quorum”, already makes you fear the worst. The film introduces us then to the personal and family problems of three astronauts who are chosen to fly to Mars. After this long (very long) intro and lots of Nasa stock footage the movie really gets nonsensical. The “spaceship” is nothing more than a slightly altered tin-can, the helmets of the space suits are open beneath the chin, and the scenes on “Mars” were shot on a very small sound stage without the illusion of a horizon. While Darren McGavin carries this whole nonsense with remarkable seriousness, Nick Adams seems not to be very happy with his part in this trash. “Mission Mars” is a low budget movie better suited for the 50s, but without the charm of most of the SF movies of this period. It’s theatrical, third-rate and was already very dated when it was produced.