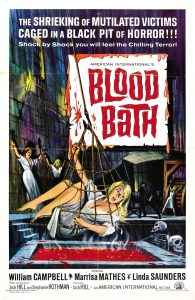 One of the most underrated gonzo films of all times! On the surface, this is an atmospheric, low-budget and sometimes confusing horror film. But this amazing work is composed of three separate films and was several years in the making.

Roger Corman, noted producer/director, hired Jack Hill in 1964 to write and direct a horror film with the condition that he make liberal use of footage from “Operation Titian”, a thriller Corman produced with Francis Ford Coppola (!) in Yugoslavia, but deemed unworthy of USA release. Hill was given actor William Campbell, Titian’s star, and hired Lori Saunders (still using her original name of Linda Saunders, and soon Petticoat Junction-bound).

However, Corman didn’t like the resulting film about a murderous sculptor possessed by the spirit of his ancestor, who was killed by a beautiful witch. So he shelved it for a year, bringing it out for director Stephanie Rothman to revise. Rothman turned the possessed sculptor into a vampire, shot extensive new footage (using a few members of the supporting cast) and—bingo!—“Blood Bath” was out in the theaters at last, as the co-feature for “Queen of Blood” in 1966.

Despite its plentiful source materials, the finished film ran only 69 minutes. When it was prepared for TV release, Corman changed the title to “Track of the Vampire” (Rothman’s title of choice) and added approximately 11 minutes of additional footage (some of it outtakes from Hill’s and Rothman’s shoots). Further complicating matters, Corman released the English-dubbed version of “Operation Titian” directly to TV at about the same time as “Portrait In Terror”.

Amazingly, this complex mishmash works. Atmospheric, intense and with some violent and original touches, “Blood Bath” is the most successful example of Roger Corman’s eclectic approach to creativity. Its current placement in critical limbo is only because the film remains frustratingly difficult to find. But it’s worth the search.